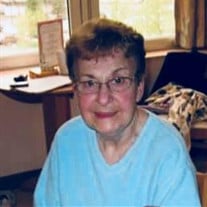 WRENTHAM- Madeleine Livingston-Marsden, 86, of Wrentham, formerly of Attleboro passed away peacefully on Saturday, April 14, 2018 at the Serenity Hill Nursing and Rehab Center in Wrentham. She was the wife of the late Douglas Livingston. Madeleine was born on April 27, 1931 in Pawtucket, Rhode Island and was a loving daughter to the late Alfred and Rose (Michaud) Lescault. Madeleine was raised and brought up in Pawtucket. In her younger years, she worked as a waitress at Morin’s Diner. Later in life, Madeleine was the proud owner and operator for many years of the Slim Shoppe in Attleboro. In her spare time, Madeleine enjoyed singing and music. She put her beautiful voice on display by singing at Capron Pak and also a song leader at the former Holy Ghost Church. She produced fashion shows in an effort to raise money for charity. Most of all, Madeleine was most happy when she was spending time with her wonderful and dear grandchildren. Madeleine is survived by her six cherished children, Evelyn Martina and her husband Michael of Arizona, Alfred Levasseur of the Philippines, James Levasseur of Texas, Timothy Levasseur of Texas, Helen Geisel of Attleboro, and Donna Lavoie and her husband Gene of Attleboro; her beloved 17 grandchildren and many great-grandchildren, including her namesake, Madelyn Lavoie; her sister, Gloria McManus of Lincoln, R.I; and also many nieces, nephews, and friends. In addition to her husband and parents, Madeleine was predeceased by her siblings, Alfred Lescault, Helen Robitaille, Lola Gregoire, and Alice Lauzon. Relatives and friends are invited to attend a Mass of Christian Burial on Friday, April 20th at 11 a.m., in St. Vincent de Paul Church, 71 Linden St., Attleboro. Burial will follow in St. Stephens’s Cemetery, South Main Street, Attleboro. Visitation has been respectfully omitted. In lieu of flowers donations in Madeleine’s memory may be made to the Alzheimer’s Association, P.O. Box 96011, Washington, D.C. 20090 or directly at www.alz.org

WRENTHAM- Madeleine Livingston-Marsden, 86, of Wrentham, formerly of Attleboro passed away peacefully on Saturday, April 14, 2018 at the Serenity Hill Nursing and Rehab Center in Wrentham. She was the wife of the late Douglas Livingston. Madeleine... View Obituary & Service Information

The family of Mrs. Madeleine Livingston-Marsden created this Life Tributes page to make it easy to share your memories.

Send flowers to the Livingston-Marsden family.