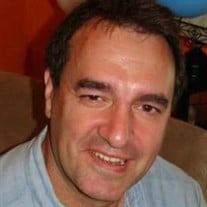 Fall River – Luis Tito Lima, 60, of Fall River, passed away on Monday, November 16, 2020 at home surrounded by his loving family. He was the loving father to Raquel E. Lima of Cranston, R.I. and Shantel K. Lima of Central Falls, R.I. Born on January 25, 1960 in St. Michael, Azores, he was the beloved son of the late Luis M. and Maria (Silva) Lima. Luis Tito “Lou” Louie, a hindered unbound soul was born on the beautiful Island of Sao Miguel in Portugal and moved to the United States at age 14. He grew up in Attleboro in his teen years and attended Attleboro schools. Luis worked as a senior computer programmer for E.A. Dion, he was quick to credit his late brother Ruben for giving him the knowledge to have a successful career in computer programming. Luis loved cars; he garnered that passion from building cars with his brother Demetrio. He loved computers, driving his convertible while listening to music, collecting coins, music albums, watching the sunset, anything Elvis, Portuguese cuisine and being with his loved ones. He was the man behind the camera, a trait he inherited from his Dad, if a moment were to be captured, Luis was always ready. He was known for being witty, clever, warm hearted, playful and always ambitious. He will be deeply missed by all who had the pleasure of knowing him. In addition to his daughters whom he loved dearly and boundlessly, Luis is survived by his beloved fiancé Lidia; her daughter’s Stacy Couto and Tiffany Carvalho both of Fall River; his brother Demetrio Lima of Attleboro; his sister’s Marina A. Reid of Bourne, and Jennifer E. Lima of Attleboro; Brother-in-laws Steve Russ of Attleboro and Brian Reid of Bourne; his niece’s Nicole Capuano, Jessica Novack, Leah Lima, Julia Turner, Nina Turner and Lily Russ; His nephew’s Christian Turner and Cody Russ. He was the brother of the late Ruben C. Lima, Maria-Paula Lima and Telmo L. Lima. All services for Luis will be held privately by his family.

The family of Mr. Luis Tito Lima created this Life Tributes page to make it easy to share your memories.

Send flowers to the Lima family.