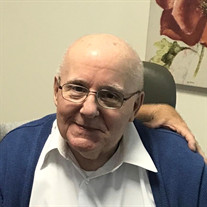 NORTH ATTLEBORO - Louis F. Pistocco Sr., 86, of North Attleboro, passed away on Sunday, January 28, 2018 at the Life Care Center of Attleboro. He was the devoted husband of the late Mary (Birch) Pistocco, whom he married on Saturday, April 12, 1958, at St. John’s the Evangelist Church in Attleboro. He was born on October 9, 1931, in Providence, R.I. Louis was the dedicated son of the late William and Asunta (Dimaeo) Pistocco. Louis grew up in Providence and graduated from East Providence High School. After high school, he attended the Rhode Island College of Pharmacy, which he graduated from in 1955. Following college, Louis quickly found work as a Staff Pharmacist at Memorial Hospital. He worked there for 10 years from 1955-1965. Throughout his life, Louis was also employed at Miriam Hospital, Our Lady of Fatima Hospital, and also several community pharmacies. Louis was a well-known member of the North Attleboro Lions Club, where he served as President from 1976-1977. He was also a long time communicant of St. John’s the Evangelist Church in Attleboro. In his spare time, Louis enjoyed spending time at the beach and summers spent on Cape Cod. He was also an avid card player with his wife’s family. However, Louis was most happy when he was spending time with his devoted family and grandchildren. Louis is survived by his loving children, Mary-Lou O’Brien of Douglas, MA, Kathleen Pistocco of New Hampshire, Louise Germani and her husband Salvatore of North Attleboro, and Louis Pistocco Jr. and his wife Christine of Attleboro; his grandchildren, Daniel and Megan O’Brien of Douglas, MA, Joseph Germani of New York, and Mark Germani of Michigan; his step-grandchildren, Ashley and Meaghan Sheehan both of Attleboro; his great-grandchildren, Kenzie Ava O’Brien of Douglas, MA and Mila Jade Reed of Attleboro; his late brother’s daughter, Debbie Capitelli and his many other nieces and nephews, who knew him as “Uncle Buddy”; also his close friends, Heather and Steve. In addition to his wife and parents, Louis is predeceased by his brother, William Pistocco and his son-in-law, Daniel O’Brien Sr. The family would like to especially thank Louis’s four caregivers, Christine W., Tara, April, and Donna for all of their dedication and support. Relatives and friends are invited to attend a visitation from 9:30 – 10:30 a.m. on Thursday, February 1, 2018 in the Duffy-Poule Funeral Home, 20 Peck Street, Attleboro. A Mass of Christian Burial, will follow at 11 a.m., in St. John the Evangelist Church, 133 North Main St., Attleboro. Burial will follow in St. John’s Cemetery, West Street, Attleboro. In lieu of flowers, donations in Louis’s name may be made to a charity of your choice.

NORTH ATTLEBORO - Louis F. Pistocco Sr., 86, of North Attleboro, passed away on Sunday, January 28, 2018 at the Life Care Center of Attleboro. He was the devoted husband of the late Mary (Birch) Pistocco, whom he married on Saturday, April 12,... View Obituary & Service Information

The family of Mr. Louis F. Pistocco Sr. created this Life Tributes page to make it easy to share your memories.

Send flowers to the Pistocco family.