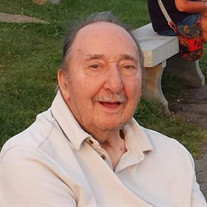 NORTH ATTLEBORO – Louis E. Aracri, 84, of North Attleboro, passed away on Thursday, June 20, 2019 in the Sturdy Memorial Hospital, Attleboro. He was the loving husband of the late Judith A. (Miramant) Aracri. Born on May 30, 1935 in Boston, MA he was a son of the late Rocco and Theresa (Lisi) Aracri. Louis grew up in the North End section of Boston and has since been a resident of the Attleboro area for the past 50 years. He was a self-employed painter and wallpaper hanger for over 40 years before his retirement. Louis was a communicant of St. John the Evangelist Church in Attleboro and he enjoyed playing pool, watching westerns and following all the professional New England sports teams Louis truly enjoyed spending time with his family. He is survived by his loving four daughters, Irene T. Aresenault of RI, Donna M. and her husband Paul Lanci of North Attleboro, Debra A. Aracri of North Attleboro and Cassandra A. Aracri of RI; his beloved five grandchildren: Joshua A. Arsenault, Jacob L. Arsenault, Caleb E. Arsenault, Jesse P. Lanci and Sophia M. Lanci and also several nieces and nephews. He was the brother of the late Alfred and Dominic Aracri and John Mucci. Relatives and friends are invited to attend a visitation on Tuesday, June 25, 2019 from 4 to 8 p.m. in the Duffy-Poule Funeral Home, 20 Peck Street, Attleboro. A funeral will be conducted at 9 a.m. on June 26, 2019 from the Duffy-Poule Funeral Home, followed by a Mass of Christian Burial at 10:00 a.m. in St. John the Evangelist Church, 133 North Main Street, Attleboro. Burial will follow in St. Mary’s Cemetery, North Attleboro. In lieu of flowers, donations to the American Diabetes Association, P.O. Box 15829 Arlington, VA 22215 would be appreciated.

NORTH ATTLEBORO &#8211; Louis E. Aracri, 84, of North Attleboro, passed away on Thursday, June 20, 2019 in the Sturdy Memorial Hospital, Attleboro. He was the loving husband of the late Judith A. (Miramant) Aracri. Born on May 30, 1935 in... View Obituary & Service Information

The family of Mr. Louis E. Aracri created this Life Tributes page to make it easy to share your memories.

Send flowers to the Aracri family.