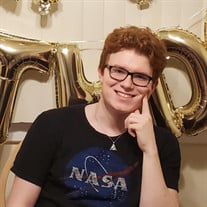 Logan Bailey O’Brien of Foxborough, passed away on Saturday, November 13, 2021 at 21 years of age. Beloved son of Deanne M. O’Brien Hagerty, her husband Michael Hagerty, and step-father Derek Valles. Cherished brother of Kaiya O’Brien-Valles of Foxborough. Adored grandson of the late Joseph L. O’Brien; Denise O’Brien Levangie and her husband Jeffrey Levangie of North Grafton; Lamont Valles, Sr. of East Providence; Djini (Valles) Tavares of Pawtucket, RI. He also leaves many uncles, aunts and cousins. Logan was born in Worcester and moved to Cape Coral, FL in 2009. In 2014, he moved to Cranston, RI where he attended Cranston High School West obtaining his High School Diploma. In 2019, he moved to Foxborough until present. Logan was taken from us too soon. He had so much to offer the world. From his infectious smile to his witty humor. Logan was so proud of his Irish heritage. His mother, Deanne, will always cherish the mother and son trip they took to Ireland together. She will forever hold those memories close to her heart. Logan enjoyed playing Dungeons and Dragons with his close friends. He would make them coffee and baked desserts, a passion he learned from his grandmother Denise. Logan was the son every parent hopes for and he was an amazing big brother to his sister Kaiya. He not only looked out for her, but was the biggest inspiration in her life. He shaped her morals and interests. He played a major role in helping her become the person she is today. Logan will be missed by so many, but our hopes are that he will live on, spiritually and physically, through the many lives he saved as an organ donor. Relatives and friends are invited to attend a Memorial Visitation on Tuesday, November 23, 2021 from 2-4 PM, followed by a service at 4 PM at Duffy-Poule Funeral Home, 20 Peck Street, Attleboro. Burial will be private. In lieu of flowers, donations in Logan’s name, may be made to Samaritans, Inc., 41 West St., 4th Floor, Boston, MA 02111 or www.samaritanshope.org

The family of Logan Bailey O'Brien created this Life Tributes page to make it easy to share your memories.

Logan Bailey O’Brien of Foxborough, passed away on Saturday,...

Send flowers to the O'Brien family.