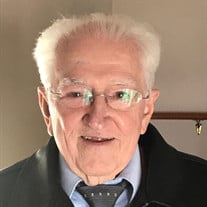 ATTLEBORO - L. Raymond “Ray” Laferriere died peacefully at his home on September 20, 2019, surrounded by family, after a brief illness, at the age of 88. Ray was born September 10, 1931, in Attleboro, MA to Elzear “Joe” Laferriere and Alexina (nee Blouin). Ray was married to Georgianna “Gig” DeLollis on May 30, 1955, in Worcester, MA. He was pre-deceased by Gig, who passed away in December 2014 and also by his daughters Carol Olsen (2000) and Janice Laferriere (2017), as well as an infant son, Mark (1957). He is survived by four daughters: Diane Laferriere-Murphy (Kevin), Michelle LaPlante (Mark), Paula Cassidy (Michael), and Monique “Nicki” Laferriere, and his son-in-law James Olsen (Ruth). He is survived by 16 grandchildren: Craig, Miles (Amanda), and Nicholas LaPlante; Chloe Cook (Adam), Amy Hagner (Andrew), and Phillip LaPlante; Lorin (Anya), Noah, and Daniel Olsen; Megan, Hayley, and Graycen Cassidy; Jessica Houck, Shelli, Julian, and Aidan Murphy; and 5 great grandchildren: Magnus LaPlante (Craig); Ellie, Isaac, and Nathan Laplante (Miles and Amanda); and Sean Cook (Chloe and Adam). Ray came from a family of six brothers and one sister and is survived by many nieces and nephews, as well as his god-children, David Laferriere, Lori Laferriere Gagnon, and Bill Copley, Jr. After graduating from Attleboro High School in 1949, Ray served in the US Air Force from 1950-54, achieving the rank of Staff Sergeant. He was stationed in Lubbock, TX and then Bolling AFB in Washington, DC. It was in DC that he met a fun-loving gal from Worcester, MA. He and Gig DeLollis would share rides home from DC to MA for holidays, leading to their courtship and then marriage. The newlyweds lived in Attleboro, and Ray enrolled at Boston College. As a young husband and father, he commuted to college, worked nights at the Automatic Machine Products Co., and graduated with a BS/BA in Business Management in 1958. The family then lived for a few years in Plainville, MA, before returning to Attleboro, where he resided in his home on Mulberry Street for 52 years. Ray spent his professional life working in the Attleboro region’s manufacturing industry. He began his career at the Hilsinger Corporation in Plainville, MA, that made eye glasses and accessories. He then moved into the area’s renowned jewelry business. His proficiency in operations management supported Donley Manufacturing (Operations Manager) and Rosecraft, Inc. (VP of Operations) in their growth and success. He thrived in his work, undertaking the challenges of expanding businesses with dedication and enjoyment. He retired in 1993. In addition to their lively family life, Ray and Gig loved to listen to jazz and dance to big band music, traveling throughout the Northeast to hear favorite performers. Ray and Gig also traveled extensively throughout Europe and in the US, including many trips to Colorado to ski. Along with his love of skiing, he was an avid runner and ran regularly, even into his 70s. He found great enjoyment in gardening, and was known to spend hours outside in his yard, where passersby often commented on his lovely gardens and marveled at the 87-year-old man hauling around tubs of soil and bags of mulch on a hand cart. Ray was a very active communicant at St. Joseph’s Catholic church in Attleboro. There, he helped run the community food cellar and served as the church’s accountant and on the finance council for many years. He also served on the pastoral council. He delighted to sing in the choir, as well. For his service to the church and the community, the Diocese of Fall River awarded him the honor of a Marion Medal. He and Gig hosted international students and priests in their home and spent many years involved with the Communion and Liberation movement. Among those special friends, one visited annually and truly became another “daughter/sister” to the family—Montserrat “Montse” de Haro of Madrid, Spain. Subsequently, Ray was a communicant of St. Vincent de Paul parish after the merger of St. Joseph’s and the Holy Ghost congregations, where he was the treasurer of the St. Vincent de Paul Society and continued in the church choir. Ray and Gig were early advocates in the state of Massachusetts for integrated education for special needs children, and founding members of the Attleboro Association for Retarded Children (AARC). Most significantly, Ray Laferriere loved to be surrounded by his family and friends—watching the Patriots or splashing in the pool or sharing laughter and stories over a good meal and a perfect Manhattan. He was a generous and beloved friend to many and will be sorely missed. Visitation will be held on Sunday, September 29, from 4 - 7 p.m. in the Duffy-Poule Funeral Home, 20 Peck Street, Attleboro. A Mass of Christian Burial will be held on Monday, September 30, at 10:30 a.m. at St. Vincent de Paul’s Church, 71 Linden Street, Attleboro. In lieu of flowers, the family suggests donations to St. Vincent de Paul’s Food Cellar.

The family of Mr. L. Raymond Laferriere created this Life Tributes page to make it easy to share your memories.

Send flowers to the Laferriere family.