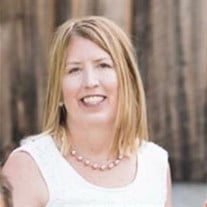 ATTLEBORO – Kimberly A. Jolly, 50, a lifelong resident of Attleboro passed away on Wednesday, August 8, 2018. Born on March 4, 1968 in Attleboro, she was a loving daughter to the late William A. and Sylvia H. (Frederickson) Jolly. Kimberly was employed at The Village at Willow Crossings in Mansfield for the past few years. She was an avid New England Patriots fan and she enjoyed crafts, painting, ceramics, floral arranging and dogs. Kimberly’s most treasured moments were spending time with her nieces and nephews. She always made time to be at most of their school and sporting events. Kimberly was the “Best Auntie” and was affectionately known as “Kiki”. Kimberly also had a special place in her heart for all of her good friends and co-workers. Kimberly is survived by her two brothers, Gregory Jolly of Attleboro and Stephen Jolly and his wife Kristina of North Attleboro; a sister, Julie Lambert and her husband Michael of North Attleboro; her nieces and nephews, Kacey Jolly and Kellen Jolly both of Attleboro, Ava Jolly, Anthony Jolly, Michael Lambert and Marley Lambert all of North Attleboro; her two aunts, one uncle, and many cousins. She also leaves her dear friend, Jack LaMothe of Attleboro and her family of co-workers at The Village at Willow Crossing. Relatives and friends are invited to attend a memorial visitation from 5 – 7 p.m. on Thursday, August 16, 2018 in the Duffy-Poule Funeral Home, 20 Peck Street, Attleboro. Burial will take place at a later date in St. John’s Cemetery, Attleboro. In lieu of flowers, donations in Kimberly’s memory can be made to: Friends of Attleboro Animal Shelter, P.O. Box 592, Attleboro, MA 02703 or directly at www.faaspets.org

ATTLEBORO &#8211; Kimberly A. Jolly, 50, a lifelong resident of Attleboro passed away on Wednesday, August 8, 2018. Born on March 4, 1968 in Attleboro, she was a loving daughter to the late William A. and Sylvia H. (Frederickson) Jolly.... View Obituary & Service Information

The family of Ms. Kimberly A. Jolly created this Life Tributes page to make it easy to share your memories.

ATTLEBORO – Kimberly A. Jolly, 50, a lifelong resident of Attleboro...

Send flowers to the Jolly family.