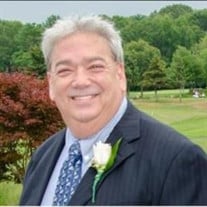 ATTLEBORO - Kevin M. Sweeney (62) of Attleboro, passed away unexpectedly in the comfort of his home after a brief and courageous battle with Glioblastoma Brain Cancer on Thursday May 7th, 2020. Kevin was born in Pawtucket RI, on July 3rd, 1957 to the loving parents Albert Thomas Sweeney and the late Ann Selma Sweeney. Kevin was raised in South Attleboro and was a 1975 graduate of Attleboro High School. Throughout his early adulthood Kevin worked at Stern & Leach for over 20 years in Jewelry sales. From there Kevin continued pursuing his career and began working in the Rhode Island Jewelry Industry before working at National Chain in Warwick, RI for 8 years up until his diagnosis. Kevin was adored by all that he came in contact with, friendships on so many levels formed throughout his lifelong career. Known for his charismatic smile, jovial laugh and embracing hugs, Kevin was certainly one to make a positive impression on those lives that he touched. Kevin took much pride in raising his two sons, Dr. Ty Sweeney (Jane McClenathan) and Evan Sweeney with former spouse Maureen Ty, being much involved in their athletic coaching throughout their childhood in North Attleboro. There was not anything that he was not proud of when it came to his boys, they were the light of his life. Later on, in Kevin’s life, he met his loving and adoring spouse Heidi (Magnin) Sweeney of Attleboro whom he has shared the past 16 years of his life with. In addition to his wife, he then became the “Dad” to another Four Children, Ashley Santos (Jonathan), Alanna Mulcahy, Libby Mulcahy (Christopher Freeman), Jake Mulcahy (Katie Correia). In addition, he was the proud Grandpa of Coral & Maxx Santos, Lilly Rios and Brody Smith. Kev was loved by them so deeply and will be greatly missed. Kevin is survived by his loving siblings; Mary Jo Sweeney (Christopher Johnson), William F. Sweeney (Claudia), Beth Ann Queenan (Thomas), Ellen T. Sweeney (James Federici) and Matthew T. Sweeney. In addition, Kevin was the amazing Uncle to several nieces, nephews, and great nieces and nephews who will miss him tremendously along with several cousins and extended family. Due to the current circumstances with Covid-19, all services will be omitted at this time and postponed to a later date where a celebration of life will take place to honor and tribute his life. We ask that in lieu of flowers, gifts may be made to Dana-Farber Cancer Institute in Memory of Kevin M. Sweeney to support cancer research and patient care at: Dana-Farber Cancer Institute, P.O. Box 849168 Boston, MA 02284 or directly at www.dana-farber.org/gift or donations can be made to: Lifespan Cancer Institute, Development Office, PO Box H, Providence, RI 02903. Please include the following note along with your Donation: In Memory of Kevin Sweeney"

ATTLEBORO - Kevin M. Sweeney (62) of Attleboro, passed away unexpectedly in the comfort of his home after a brief and courageous battle with Glioblastoma Brain Cancer on Thursday May 7th, 2020. Kevin was born in Pawtucket RI, on July 3rd, 1957... View Obituary & Service Information

The family of Mr. Kevin M. Sweeney created this Life Tributes page to make it easy to share your memories.

Send flowers to the Sweeney family.