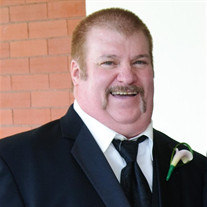 Keith Alan Maston, 65, of Attleboro, passed away peacefully on January 8, 2020 at Massachusetts General Hospital, with his family by his side, after his long-haul with heart disease. He was the beloved husband of Sharon (Viens) Maston to whom he was married for 37 years. Born in Pawtucket, Rhode Island on February 10, 1954, he was the son of the late Walter and Henrietta (Kelly) Maston. Keith was the proud father to his children, Craig Maston and his wife Valerie, Jamie-lyn Wild and her husband Michael, and Cody Maston, all of Attleboro. Keith was "Poppy" to his three adored grandchildren Jacob, Logan and Aleigha. Keith graduated from Attleboro Vocational High School in 1972 where he then began his lifelong occupation as a passionate third-generation truck driver. In 1986 Keith achieved his dream of becoming an owner-operator with the purchase of his 1979 Kenworth and the beginning of K.A. Maston & Son Trucking. Keith treasured his Kenworth, taking impeccable care and joy in maintaining and polishing his truck to the highest standards. Keith would frequently be heard saying, “All shined up and lookin’ good, ought to be in Hollywood”. Keith’s knowledge, talent, and demeanor in the trucking industry earned him great respect and his honored CB handle, “Good Ol’ Boy”. Keith cherished the memories he made traveling the country, driving with his shotgun rider, son Craig. After Keith’s retirement, he relished in lending any and all advice to his son’s, guiding them down the road as they continued the family trucking tradition. When Keith wasn’t trucking his time was spent with his family. No matter the occasion Keith loved to be the life of the party, goofing off and bring a smile to everyone’s face. Keith was an avid lover of all thing’s country: listening to music with his granddaughter, Aleigha, line dancing with his daughter Jamie-lyn, and watching John Wayne movies. Keith also had a love for football, especially the Patriots. In earlier years he was the assistant coach to his son Cody’s South Attleboro White Hawk team. And in later years, enjoyed cheering on his grandson’s Jacob and Logan on game day. Keith was the memorable brother to Gary Maston of Attleboro, MA, Kevin Maston of Norfolk, MA, Gale Bertrand of Pawtucket, RI, Cheryl Gray of Bullhead City, AZ, Robin Papineau of Leesburg, FL, Glenn Maston of North Attleboro, MA, Sherri Maston of Attleboro, MA and the late Ralph Maston of North Attleboro, MA. He also leaves many nieces and nephews. Relatives and friends are cordially invited to honor and remember Keith on Wednesday, January 15, 2020 from 4:00 p.m. to 7:30 p.m. with a memorial service to immediately follow at 7:30 p.m. at Duffy-Poule Funeral Home, 20 Peck Street, Attleboro, MA. Private burial will take place at a later date. In lieu of flowers, memorial donations may be made in Keith’s name to benefit the Massachusetts General Hospital Development Office, Cardiac Research, 125 Nashua Street, Suite 540, Boston, MA 02114. Keith’s family would like to thank Dr. George Watters, who many years ago saved Keith’s life and helped guide him through the beginning of his journey. We would also like to express our appreciation to the unbelievable dedication to the of Doctors, the VAD team, SICU nurses and the support staff at Massachusetts General Hospital; the care and compassion they gave Keith and all of us in helping through the end of Keith’s journey, is indescribable.

Keith Alan Maston, 65, of Attleboro, passed away peacefully on January 8, 2020 at Massachusetts General Hospital, with his family by his side, after his long-haul with heart disease. He was the beloved husband of Sharon (Viens) Maston to whom... View Obituary & Service Information

The family of Mr. Keith Alan Maston created this Life Tributes page to make it easy to share your memories.

Keith Alan Maston, 65, of Attleboro, passed away peacefully on...

Send flowers to the Maston family.