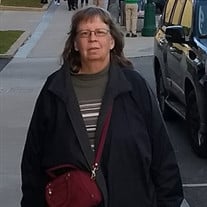 Rehoboth – Katherine Ann Gagnon (Wilson) of Rehoboth passed away quietly on Sunday, November 29, 2020 at HopeHealth Hulitar Hospice Center in Providence, RI. She was the beloved wife of Robert P. Gagnon. Born November 21, 1957 in Pawtucket, RI to Lansdale and Marie-Jean Germaine (Poulin) Wilson. Katherine was a graduate of Bishop Keough Regional High School. After graduating she worked at Texas Instruments as a circuit breaker calibrator on the Navy line. As fate would have it that is where she met her future husband. They were married shortly after in 1989 and she would leave her job to raise her two children. The newly married couple faced some tough economic times, which only served to strengthen their bond together and they were inseparable throughout their lives. These were busy years raising two boys. She had a great friendship with her husbands’ mother (Ruth Gagnon) and grandmother (Yvonne Bissonnette), the three were a force to be reckoned with. Eventually, as the economy improved, so did the family’s fortunes. They bought some land in Rehoboth and built their dream house. As the kids grew older and less dependent, she returned to work at Kohl’s and later the Salvation Army. Now older, she made many friends, and was a “work mother” to a select few younger coworkers. Kathy was the oldest of six, she was very close to her four brothers, her father, his sister Evelynn and her Aunt Bea. Anyone who spent time with Kathy quickly learned that she had an aggressive, sarcastic and stubborn personality with a quick temper. What she loved best about her husband was he wasn’t intimidated by any of it, he appreciated her sincerity and honesty. This led to some heated, witty, and comical exchanges from time to time until they both compromised. Although you could never really tell Kathy to do anything, you could talk her into trying things that were beyond her comfort zone if you were clever enough. Kathy loved animals, especially cats, she was a true cat “whisperer.” She was always bringing a stray home, or they would just simply walk up to her house knowing she would take care of them. She was always challenged by the technology around her that she loved to use. Kathy was an avid reader and loved history, she knew all the royal lines of Europe and how they were connected. During their many vacations, she traveled to foreign places like the Dominican Republic, Bermuda, and Belize. They visited many places in the United States, including New Orleans, Key West, and Arizona, to name a few. The couple had planned to travel extensively through Europe and around the US in their retirement, which was only a few years away. Every year in homage to the early years of their marriage she and her husband would explore the Mohawk Trail on their wedding anniversary. This year on September 29th she was not feeling well, and they did not go. Shortly after it was learned that she had an advanced form of cancer and she passed away on November 29th a few days after her 63rd birthday. In addition to her husband Robert, Katherine is survived by her son Michael J. Gagnon and her son Alexander T. Gagnon of Rehoboth, MA; her four brothers Robert Wilson of Warwick, RI, Michael Wilson of Pleasanton, TX, Paul Wilson of Lincoln, RI, and Christopher Wilson of Warwick, RI. She also has a sister Susan Armacost (Wilson) of Warsaw, IN and her mother Marie Wilson of Warwick, RI. In lieu of flowers, donations in Katherine’s name may be made to Project Spay Inc. PO Box 445, Swansea MA 02777 https://projectspayrescue.com/ Boston's Forgotten Felines, c/o Joni Nelson, 21 Montvale St, Roslindale, MA 02131 https://www.bostonsforgottenfelines.org/ Rehoboth Animal Shelter c/o Sandi Ruscetta, 148 Peck Street, Rehoboth, MA 02769. Relatives and friends are invited to attend a memorial visitation Tuesday, December 15, 2020 at 4:15 PM to 7:00 PM at the Duffy-Poule Funeral Home, 20 Peck St., Attleboro. Feel free to attend in your favorite cat shirt or sweater. For the safety of those who wish to pay their respects, please do so in accordance with CDC, federal and state guidelines including social distancing and the use of face masks.

The family of Mrs. Katherine Ann Gagnon created this Life Tributes page to make it easy to share your memories.

Send flowers to the Gagnon family.