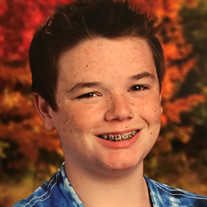 ATTLEBORO- Justin Dillon Parker, 14, of Attleboro, passed away surrounded by the love, comfort, and care of his devoted family on Tuesday, October 9, 2018, at the Hasbro Children Hospital in Providence, Rhode Island. Born on August 17, 2004, in Providence, RI, Justin was the beloved and adored son to Charles Parker and Jessica Stanley and “Bonus-Dad” James Barnes and stepmother Patty Delfino, all of Attleboro. Justin was raised in Attleboro and was a lifetime Attleboro resident. At the time of his passing, he was enrolled as a freshman with the Class of 2022 at Attleboro High School. Being a hard worker at such a young age, Justin was most recently employed with his family’s business, Cleaning Without Limits in Attleboro. Justin was very involved in the athletic community in Attleboro. He was an athlete across many different sports leagues including Attleboro Youth Soccer, Attleboro Youth Baseball, and Attleboro White Hawk Football. In 2016, Justin had the distinct honor of his jersey, # 83, being inducted into Attleboro White Hawks Football Hall of Fame. In his spare time, Justin enjoyed playing and watching all types of sports, especially football, with his favorite team being the New York Giants. To be the best athlete he could be on the field, Justin could often be found lifting weights and exercising at the YMCA in Attleboro. He loved watching World Wrestling Entertainment, Inc. (WWE) and was an avid collector of WWE action figures. Justin liked to play video games, Pokémon, and go swimming, especially with his friends and teammates. Justin will be fondly remembered as a quick-witted and wise-cracking lovable kid. He had a big caring heart and would always try to make people laugh, especially in the times where it was needed most. His passion for football and sports were a focal point of his life. He studied teams, players, and even kept journals of player’s stats. His friends and teammates were his brothers on and off the field. Justin truly cherished all of the close relationships he made and also every single moment he spent with his dear family. “FTB.” In addition to his parents, Justin is survived by his brothers, Jason, Nathan, Colben, Kayden, and Mason; his sisters, Cali, Hannah, Cara, Olivia, and Lily; his grandmother, Donna Sidney of Mansfield; his aunts and uncles, Scott Parker and Audra Gilpatrick of Mansfield, Gerald and Chirie Parker of Attleboro, Rosemary Parker and Tim Redden of Pawtucket, Gloria and Jack Montanaro of Whitman, Neil and Louanne Stanley of Norton, Dean and Patty Hawksley of Norton, Jackie Stanley of Mansfield, and Jamie Stanley and John Gomes of Norton; and also many cousins, friends, and teammates. Justin is predeceased by his grandparents, Ronald Parker Sr., Kathleen Parker and Junior Sidney. Justin’s Family would like to graciously express thanks to the Attleboro Blue Pride Community for the outpouring of support and kindness. They would also like to acknowledge the staff at the Hasbro Children’s ICU for their tireless efforts in caring for their beloved son. Relatives and friends are invited to attend a visitation on Tuesday, October 16th, 2018 from 4 to 8 p.m., in the Duffy-Poule Funeral Home, 20 Peck Street, Attleboro. A graveside service will take place on Wednesday, October 17th, at 11:00 a.m. at St. Stephen's Cemetery, South Main Street, Attleboro. A collation in memory of Justin will be held following the service from 12-4 p.m. at the Attleboro Elks Lodge #1040, 887 South Main St, Attleboro, MA 02703. All are invited to attend. In lieu of flowers, donations in Justin’s memory may be made to the Concussion Legacy Foundation at the following web address: https://concussionfoundation.org/give-online or to the Justin Dillon Parker Memorial Fund at the following web address: https://www.gofundme.com/68ksivk

ATTLEBORO- Justin Dillon Parker, 14, of Attleboro, passed away surrounded by the love, comfort, and care of his devoted family on Tuesday, October 9, 2018, at the Hasbro Children Hospital in Providence, Rhode Island. Born on August 17, 2004,... View Obituary & Service Information

The family of Justin Dillon Parker created this Life Tributes page to make it easy to share your memories.

Send flowers to the Parker family.