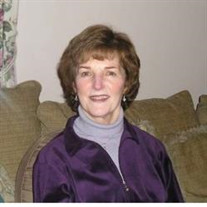 June Astrid (Bibeau) Robillard June 6, 1941-January 15, 2020 June was born and raised in Cambridge, MA. She is predeceased by her beloved husband, Phil (2011) of 50 years. It was in her neighborhood where she met the love of her life, who lived 2 doors down from her. They met during a hurricane in 1955 when June’s mom invited the paperboy, Phil, in for a soda pop and they began dating at the young age of 14 and married at 21. June worked for Harvard University as a Secretary before they married and moved to Detroit, Michigan. June and Phil had two children while living in Detroit. They then relocated to Schenectady, NY before moving to Lunenburg, MA where they would live for 15 years and raise their family. June worked as a secretary for many years at several businesses. She and Phil bought a home on Cape Cod and in 1987 moved there permanently. June was somewhat of a pioneer in diet and exercise and believed in alternative medicines and meditation long before it was popular. After running her own nutrition and exercise business in the 80s she continued her love for exercise and helping others by leading an exercise class for mature adults in Mashpee for over 25 Years and hosting many small classes in her home. She spread much love through her practice as a Reiki Master. She was so focused on being healthy that she would always say “I don’t drink—but I will have a martini”. A woman of deep faith, June was very involved in her parish in Mashpee, Christ the King: as a daily Mass communicant, 50 Plus Club President and Eucharistic Minister. She had a special devotion to angels and the Blessed Mother. She was also involved in the Brain Center, a regular walking group and after being widowed founded a group she dubbed WSHH (Women’s Society of Happy Hearts). WSHH involved dinner and community for single women every few weeks. June did not like to be idle. She was rarely seen sitting and was always reading, researching, cooking, cleaning—doing. After suffering a stroke in December 2017 June bore the cross of no longer being the active independent woman she always was. Her strength of will was on display until the very end. The loving assistance of many home care givers, everyone at Christopher Heights, the Community VNA and Home Instead made this difficult time bearable. You are all angels. She will be greatly missed by her daughter Lisa Robillard-Wells and her husband Ken, daughter Lori Castro and husband Jim and her grandchildren, Matt, Theresa and Zach Castro all of Attleboro, MA. A special thank you to her best friend Eleanor for all her love, friendship and support after June was widowed and especially after her illness. Should you wish to express your sympathy or appreciation for June, donations in her memory may be made to Bishop Feehan High School, 70 Holcott Dr, Attleboro, MA 02703 or Christ the King Parish, 3 Job's Fishing Rd, Mashpee, MA 02649. Relatives and friends are invited to attend a visitation on Tuesday, January 21, 2020 from 4 -7 p.m. at the Duffy-Poule Funeral Home, 20 Peck St., Attleboro. MA. A Mass of Christian Burial will be held at 11 a.m. on Wednesday, January 22 at the Christ the King Parish, 3 Job's Fishing Rd, Mashpee, MA. Burial will follow in the Great Neck Woods Cemetery, Mashpee.

June Astrid (Bibeau) Robillard June 6, 1941-January 15, 2020 June was born and raised in Cambridge, MA. She is predeceased by her beloved husband, Phil (2011) of 50 years. It was in her neighborhood where she met the love of her life, who... View Obituary & Service Information

The family of Mrs. June Astrid Robillard created this Life Tributes page to make it easy to share your memories.

Send flowers to the Robillard family.