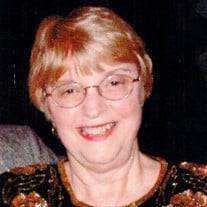 ATTLEBORO – Judy Cotter, 75, of Attleboro passed away surrounded by her loving family on Saturday, December, 1, 2018 in the Philip Hulitar Hospice Center. She was the loving wife of John (Jack) Cotter of Attleboro. Born on January 30, 1943 in Robinson, IL, she was a daughter of Gladys (Simmons) Cooley of Robinson, IL and the late Ervin Cooley. Judy was employed at Datel Inc. in Mansfield for 10 years and a secretary for over 25 years at the Sturdy Memorial Hospital in Attleboro. She was an active participant at the Rev. Gordon N. Larson Senior Center in Attleboro. She enjoyed dancing and playing cards with the girls. Judy also enjoyed traveling. In addition to her husband Jack and mother Gladys, Judy is survived by her daughter Angie Maskell of Plainville; her daughter-in-law Rachael Haskell of Florida; her grandchildren, Brendan O’Brien of Attleboro and Keilli and Dylan Maskell both of Plainville, her sister, Charlotte Wilkinson of Brazil, IN; her brother, Alan Cooley of Robinson, IL; also many nieces and nephews. Judy was the wife of the late Philip Haskell and Raymond Pelletier, mother of the late Rhoden Haskell and sister of the late Linda Compton. Relatives and friends are invited to attend a memorial visitation on Monday, December 10, 2018 from 5 – 7 p.m. in the Duffy-Poule Funeral Home, 20 Peck St., Attleboro. A Celebration of Life service will be held immediately following the visitation at 7 p.m. in the funeral home. In lieu of flowers, donations in Judy’s name may be sent to Hope Hospice, 1085 North Main St., Providence, RI 02904.

ATTLEBORO &#8211; Judy Cotter, 75, of Attleboro passed away surrounded by her loving family on Saturday, December, 1, 2018 in the Philip Hulitar Hospice Center. She was the loving wife of John (Jack) Cotter of Attleboro. Born on January 30,... View Obituary & Service Information

The family of Mrs. Judy Ann Cotter created this Life Tributes page to make it easy to share your memories.

Send flowers to the Cotter family.