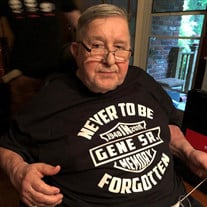 REHOBOTH - Joseph A. Quaglia, 84, of Rehoboth passed away on May 21, 2020 at the Study Memorial Hospital. He was the devoted husband to the late Sandra F. (Rock) Quaglia. Born on January 20, 1936 in Attleboro, MA, he was a son of the late William and Marie (Veto) Quaglia. Joe proudly served as a Lance Corporal in the United States Marine Corps from 1957-1960 until his Honorable Discharge. He celebrated the "Good Conduct Medal for Marksmanship” holding highest record for shooting higher than all Marines for many years to follow at the Marine Corps Base Quantico in Virginia. “"Joe was also an excellent hunter and a dead-eye shooter. I saw him shoot a running rabbit with a single shot, shot-gun. The rabbit took off running. Joe had to cock the shotgun, raise the shotgun, aim it and fire in a split second. He did it and got the rabbit. He and I were hunting another time and came across an apple tree. Joe said to me, “Want an apple? Pick one out”. I saw a nice big one at the top of the tree. With a 22 rifle, he shot the stem, not hitting the apple, and it dropped. Brother Larry." Joe worked as a boiler operator at the Robbins Company in Attleboro and as a cabinet maker at Vinecraft in Attleboro. He later worked as a forklift operator and shift steward at Almac’s, Rhode Island Produce in East Providence, RI where he was retired disabled. Joe was a member of the Precision Harley Davidson Motorcycle Group, Pawtucket, RI and was an avid bowler and high scorer at the East Providence Bowling Lanes. Joe was a long time Cape Cod Lobster Man along the Cape Cod Canal, providing his wife Sandy with one of her favorite foods, Lobsters. He was also an avid night fisher on the Cape Cod Canal, one of his favorite past times. Camping for many years in Cape Cod with friends and family were some of Joe and Sandys favorite memories and times. He is survived by his two sons, Russell R. Quaglia and his wife Mary Proulx-Quaglia and Brian J. Quaglia and his wife Mianzie Wanawan Quaglia; his grandchildren, Paul and Robert Quaglia both of Cumberland, RI, Brian J. Quaglia II of Pawtucket, RI, Marc W. Quaglia and his wife Rhea (Duckworth) Quaglia of NYC and David R. Quaglia of Rehoboth, MA; great granddaughter, Rose Quaglia of Cumberland RI.; his brothers, Carlo Quaglia and his wife Mary formerly of N. Attleboro, Lawrence Quaglia and his wife Sandra of Attleboro; his sister, Magdaline Quaglia-Mazeiko formerly of Westport MA. He is predeceased by his brother, Louis Quaglia, sister-in-law, Adeline (Petrillo) Quaglia and his first cousin, Eugene Aguiar. A private visitation will be held by the family, followed by a graveside service at the Steven’s Corner Cemetery, Rehoboth.

REHOBOTH - Joseph A. Quaglia, 84, of Rehoboth passed away on May 21, 2020 at the Study Memorial Hospital. He was the devoted husband to the late Sandra F. (Rock) Quaglia. Born on January 20, 1936 in Attleboro, MA, he was a son of the late William... View Obituary & Service Information

The family of Mr. Joseph A. Quaglia created this Life Tributes page to make it easy to share your memories.

Send flowers to the Quaglia family.