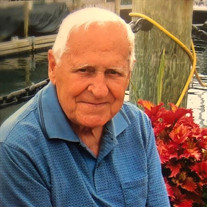 ATTLEBORO – Joseph H. Mercier, 91, of Attleboro, passed away on Tuesday, August 27, 2019 in his home surrounded by his loving family. He was the devoted husband of the late Lorraine M. (Brousseau) Mercier. Born on October 6, 1927 in Worcester, MA, he was a son of the late Edward and Theresa Mercier. Joseph and his family moved from Worcester to Attleboro when he was a young child. He enlisted in the United State Navy in 1944 at the age of 17 and proudly served during WWII while stationed aboard the USS Tortuga LSD 26, fighting in the South Pacific. Joseph was honorably discharged from the Navy in 1946. He then received his GED and returned back to Attleboro for the rest of his adulthood. He was employed by Swank, Inc. for 44 years as a supervisor until his retirement. Joseph enjoyed running, golf, spending time with his family, friends and neighbors. He especially enjoyed time spent with his grand dog “Jasmine”. The family would like to give a special thanks to the Community VNA of Attleboro for the kind and loving care they provided to Joe in his time of need. Joseph is survived by his beloved daughter, Kathleen Palomo and her husband Jose of Attleboro; his two grandsons, Joshua Palomo of Attleboro and David Palomo and his wife Sarah (Randall) of Attleboro; two loving great granddaughters, Lilly and Lilah both of Attleboro; a brother-in-law, Dr. Richard Brousseau of North Attleboro and many loving nieces and nephews. He was the brother of the late Norman Mercier, Rhoda Heon and Theresa Bergmann. Relatives and friends are invited to attend a memorial visitation from 5-8 p.m. on Wednesday, September 4, 2019 in the Duffy-Poule Funeral Home, 20 Peck Street, Attleboro. A funeral will be conducted on Thursday, September 5, 2019 at 9 a.m. from the Duffy-Poule Funeral Home, followed by a Mass of Christian Burial, at 10 a.m., in St. John the Evangelist Church, 133 North Main St., Attleboro. Burial with military honors will follow in St. Stephen’s Cemetery, Attleboro. In lieu of flowers, donations may be made to the CVNA of Attleboro Hospice Care, 10 Emory Street, Attleboro, MA 02703.

ATTLEBORO &#8211; Joseph H. Mercier, 91, of Attleboro, passed away on Tuesday, August 27, 2019 in his home surrounded by his loving family. He was the devoted husband of the late Lorraine M. (Brousseau) Mercier. Born on October 6, 1927 in... View Obituary & Service Information

The family of Mr. Joseph Henry Mercier created this Life Tributes page to make it easy to share your memories.

Send flowers to the Mercier family.