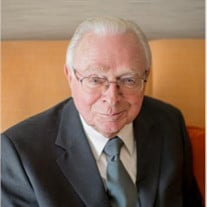 ATTLEBORO -John (Jack) G. Walsh Jr., of Attleboro and Ft. Lauderdale, FL, passed away unexpectedly on his 86th birthday in his home in Ft. Lauderdale, FL. He was the loving and devoted husband of Nora (Feeney) Walsh whom he married on February 4, 1956 in Norwood, MA. Born on January 13, 1933 in Wellesley, MA he was the son of the late John G. Walsh Sr. and Kathleen (Noone) Walsh. John grew up in Attleboro and was a graduate of Attleboro High School Class of 1951. He then attended Northeastern University where he received his Bachelors of Science in Civil Engineering in 1956. John also proudly served his country in the U.S. Army Reserves. John was the past President of Walsh Contracting Corporation and a local real estate developer whom did many projects in the Southeastern Massachusetts and Rhode Island area. John was a member of the Utility Contractors Association of New England and a past president in 1987; he proudly enjoyed being Contractor of the Year in 1996. John was a wealth of knowledge and many people would call for his opinion on many topics. He was known for his gentle demeanor and was well respected in the greater Attleboro and North Attleboro areas. An avid boater, he traveled extensively in the waters of Cape Cod, The Islands, Narragansett Bay, up and down the East Coast where he would spend winters in Fort Lauderdale, Florida. John spent many years boating the Great Loop with his children and grandchildren, all whom now have a love of boating because of the times spent with him. In addition to his wife of 63 years, John is survived by his children, John G. Walsh III and his wife Cheryl (Jorde) of North Attleboro, Thomas P. Walsh and his wife Jane (Dean) of Attleboro, Maureen A. (Walsh) Jorde and her husband Shawn Jorde of North Attleboro, and David M. Walsh and his wife Constance (Delaney) of Falmouth; his grandchildren, John M. Walsh and his wife Ashley, Bryan J. Walsh and his wife Jessica, Jeffrey D. Walsh and his wife Rebecca, Jennifer A. Scioli and her husband Frank, Gregory A. Walsh and his wife Ashlee, Kristen E. Walsh, Lauren E. Walsh, Emily K. Walsh, Alexandra M. Jorde, Kevin D. Walsh, Steven D. Walsh; his great grandchildren, Theodore, Jackson, Vincent, Emerson, Nora and Elizabeth Walsh and Olivia Scioli; his sibling William Walsh and his wife Janice and many cousins, nieces, nephews both here in the U.S. and Ireland . John was the grandfather of the late Nathan A. Jorde and brother of the late Mary Johannis, Ellen Theresa Wade and Patricia Ann O'Neil. Relatives and friends are invited to attend a visitation on Sunday, January 20, 2019 from 2 - 6 P.M. at St. John the Evangelist Church, 133 North Main St., Attleboro, Massachusetts. A Mass of Christian burial will be held at 11 A.M. on Monday, January 21, 2019 in St. John the Evangelist Church, 133 North Main St., Attleboro, Massachusetts. Interment will follow in the St. John's Cemetery, Attleboro, MA. In lieu of flowers, donations in John's memory may be made to the Dana-Farber Cancer Institute to support cancer research and patient care at: Dana-Farber Cancer Institute, P.O. Box 849168, Boston, MA 02284 or via www.dana­farber.org/gift or the Attleboro Scholarship Foundation, P.O. Box 1666, Attleboro, MA 02703.

ATTLEBORO -John (Jack) G. Walsh Jr., of Attleboro and Ft. Lauderdale, FL, passed away unexpectedly on his 86th birthday in his home in Ft. Lauderdale, FL. He was the loving and devoted husband of Nora (Feeney) Walsh whom he married on February... View Obituary & Service Information

The family of Mr. John G. Walsh Jr. created this Life Tributes page to make it easy to share your memories.