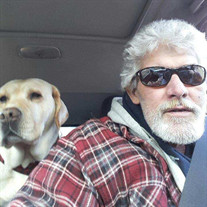 Attleboro – John F. Reynolds, 54, of Attleboro passed away at home surrounded by his loving family on Friday, December, 21, 2018, after a long, brave battle with Ankylosing Spondylitis. He was the devoted husband of Mary Ann (Converse) Reynolds of Attleboro and loving father of Lauren Reynolds of Montreal, Quebec and Kelli (Reynolds) Peluso of Queens, NY. Born on October, 23, 1964 in Winchester, MA he was the son of the late Robert J. and June M. (Reed) Reynolds. He was raised in Dedham, MA and has been a resident of Attleboro for over 30 years. John was a skilled mechanic who was employed as a transmission specialist for Triangle Transmission, Rodman Ford and Patalano Ford (now Franklin Ford). He later moved into industrial mechanics, and worked for the Crown Lift Company until his health began to decline. John was a classic car enthusiast and he especially loved taking his 1966 Ford Fairlane for long drives. He was an avid Bruins fan, enjoyed walking his best pal Mr. Johnson, and spending time with family and friends. He was always willing to lend a hand to anyone in need. John is survived by his wife, his two daughters, his son-in-law Daniel Peluso of Queens, NY; his mother-in-law Anna Ravinski of Attleboro, and his beloved sidekick and best friend Mr. Johnson. He is also survived by his brother James Reynolds of East Falmouth; his sister Peg Heatley of Warsaw, VA; his sister-in-law, Cathy Krim of Wrentham; and his brother Robert Reynolds; his cousins, Katie Jafarian and Ed Reynolds; his nieces and nephews, Reed Reynolds, Robyn Clark, Jenna Harrington, Jodi Rodrigues, Elizabeth Heatley, Jackie Heatley, David Converse, Jeremy Converse, Jared Converse, Joanna Scott, Sally Roberts, and Tom Converse. He is also survived by his many close friends, including Steve-O Ames and Dave Fontana. John is predeceased by his parents, his sister-in-law Dawne Marie Reynolds; his cousin Ellyn Young, and his father-in-law Al Ravinski. A special thank you to John’s amazing medical team at Brigham & Women’s Hospital, especially Dr. Michael Jaklitsch, Dr. Sigal Yawetz, Dr. Aaron Waxman, and the medical ICU nursing staff; Dr. Raymond Petit of Emory Medical Associates, and the Attleboro VNA. Relatives and friends are invited to attend a visitation from 4 – 7:30 p.m. on Thursday, December 27, 2018 in the Duffy-Poule Funeral Home, 20 Peck Street, Attleboro. A service will immediately follow the visitation at 7:30 p.m. in the funeral home. In lieu of flowers, donations in the memory of John may be made to the Spondylitis Association of America directly at https://www.spondylitis.org/Shop/Product/Memorial-Gift

Attleboro &#8211; John F. Reynolds, 54, of Attleboro passed away at home surrounded by his loving family on Friday, December, 21, 2018, after a long, brave battle with Ankylosing Spondylitis. He was the devoted husband of Mary Ann (Converse)... View Obituary & Service Information

The family of Mr. John F. Reynolds created this Life Tributes page to make it easy to share your memories.

Attleboro – John F. Reynolds, 54, of Attleboro passed away at...

Send flowers to the Reynolds family.