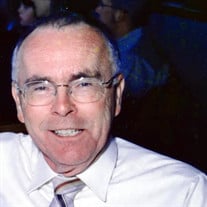 REHOBOTH - John Record, aged 76, died unexpectedly at home in Rehoboth MA on Wednesday, January 13, 2021. He was predeceased by his wife Roberta, his parents Paul and Mary Record, and his brothers Tom and Paul. A beloved husband, father, brother, and friend, John is survived by his son Mark and wife Stacy Record who loved him deeply. John is also survived by his brother James and wife Luci Record, and his sister-in-law Marie Record. Additional survivors include many nieces, nephews, and extended family members. All hearts ache with their loss. Born October 7, 1944, in South Weymouth, MA, John attended local grammar and junior high schools. He graduated in 1962 from Archbishop Williams High School in Braintree, MA. Subsequently, he matriculated at Boston University and graduated in 1966. During his long and varied career, he held numerous high level technical communication engineering positions in both public and private sector organizations. He was the youngest son of four boys. Both parents had hoped for a girl, but he was a welcomed joy who delighted his parents with his accomplishments and provided them extensive care, kindness, and support over the years. Happily married over 40 years, John and Roberta traveled extensively throughout the world. John was a romantic who missed Roberta daily and even after her death wrote her poetry. He was an active family, church, and community member. He was a spiritual man who conscientiously followed the tenets of his faith. John was a good and decent man and treated everyone well. He helped family members, friends, colleagues, and anyone he could along his life’s journey. He lived an exemplary, selfless life, and represented the best in people. A private visitation and funeral service will be held by the Record family. Relatives and friends are invited to attend the graveside service at 12 p.m. on Monday, January 18, 2021 at the Oak Knoll Cemetery, Route 118, Rehoboth, MA.

REHOBOTH - John Record, aged 76, died unexpectedly at home in Rehoboth MA on Wednesday, January 13, 2021. He was predeceased by his wife Roberta, his parents Paul and Mary Record, and his brothers Tom and Paul. A beloved husband, father, brother,... View Obituary & Service Information

The family of Mr. John Record created this Life Tributes page to make it easy to share your memories.

Send flowers to the Record family.