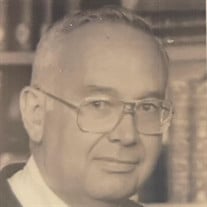 John “Jack” James Dolan (86) of North Attleboro, passed away peacefully on Tuesday December 07, 2021. He was the beloved husband of Susan Girard Dolan whom he married on October 20, 1962 at Holy Trinity Church in Georgetown, Washington D.C. Born in Barrington, Rhode Island on July 28, 1935 to the late John James and Alice Loretta (Flavin) Dolan. He was raised in Attleboro and graduated from Monsignor James Coyle High School, 1953, Tufts University, Magna Cum Laude, 1958 and Harvard Law School in 1961. He served in the United States Army from 1954 to 1956, and he was stationed in Japan. He practiced law in Braintree and Attleboro prior to his appointment by Massachusetts Governor Edward J. King in 1980 as Judge of the Attleboro District Court. Judge Dolan served the Commonwealth diligently, proudly, and with fairness to all who came before him until his retirement in 1999 from the Bench. Judge Dolan was a founding member and active in the Southeastern Regional Judges Conference. He was a member of the Attleboro District Court Bar Association, the Bristol County Bar Association, and the Massachusetts Bar Association. He was also formerly a tutor at The Attleboro Literacy Center. He and his wife raised their family in Attleboro and then moved to North Attleboro later in life. He especially enjoyed times spent with his beloved wife and family, he truly considered those times and his family his most special blessings. In addition to his beloved wife of 59 years, he is survived by his three sons and their families; Timothy, Patrick, and Michael. John leaves a legacy of love, kindness, and many fond memories with his eight grandchildren whom he adored dearly; Erin, Megan, Jack, Kaitlyn, Christian, Leighton, Kiavanni Keehan, and Brendan. Funeral services for Judge Dolan will be private. At the request of the family, donations may be made to the Alzheimer’s Association, 8180 Greensboro Drive, Suite 400 McLean, VA 22102 To send John’s loved ones a message of condolence or remembrance, please visit duffy-poule.com

John &#8220;Jack&#8221; James Dolan (86) of North Attleboro, passed away peacefully on Tuesday December 07, 2021. He was the beloved husband of Susan Girard Dolan whom he married on October 20, 1962 at Holy Trinity Church in Georgetown, Washington... View Obituary & Service Information

The family of Hon. John “Jack” James Dolan created this Life Tributes page to make it easy to share your memories.

Send flowers to the Dolan family.