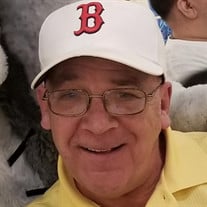 MIDDLEBORO – John (Jack) Goyette, 65, of Middleboro, passed away at home with his loving family at his side on Thursday, January 23, 2020. Jack will be joining his beloved wife, Carol (Jencks) Goyette whom he loved endlessly in life as well as death. Born on August 1, 1954 in Attleboro, MA, he was a son of Robert and Elizabeth (Dennis) Goyette. Jack grew up and lived in Attleboro before moving to Middleboro in 2013. He was a graduate of Attleboro High School Class of 1973. He later attended Southeastern Massachusetts University where he earned a Bachelor’s Degree in Engineering. Jack worked at Texas Instruments in Attleboro for 20+ years. He started working there at the age of 19 as a press operator and with much determination and hard work Jack became a process engineer whose work would be monumental in their lead frame production. He would later work for Sensata as well as Umicore both located in Attleboro. Jack was very proud of his accomplishments and in finally earning the title of lead engineer. He was the epitome of a hard worker and prided himself in doing his very best job. Always happy to help those around him anyway he could, Jack was a leader and a mentor, proudly admired by all that worked alongside him. There was only one thing Jack loved more than his work as an engineer and that was his family. Jack is survived by his daughter, Michelle Madden and her son, Boston with which he resided with in Middleboro, MA. Jack was an amazing husband, father and grandfather. A caring and generous brother and brother-in-law. He leaves behind Aunts, Uncles and many nieces and nephews. Along with his family, Jack leaves behind many people who cared about him deeply and who considered themselves lucky to call Jack their friend. Many thanks to all of his friends and family who supported him and sent words of love and encouragement during his time of need – it really meant the world to him. Relatives and friends are invited to attend a visitation on Tuesday, January 28, 2020 from 4 – 7 p.m. in the Duffy-Poule Funeral Home, 20 Peck St., Attleboro. MA. A funeral will be conducted on Wednesday, January 29, at 10 a.m. from the Duffy-Poule Funeral Home, followed by a Mass of Christian Burial at 11 a.m. in the St. John the Evangelist Church, 133 North Main St., Attleboro. Burial will follow in the St. Mary’s Cemetery, Attleboro Falls. In lieu of flowers, a small note telling of a special time spent with Jack will be greatly appreciated. Helping to heal the pain of his loss for his family and in keeping his spirit alive and well.

MIDDLEBORO &#8211; John (Jack) Goyette, 65, of Middleboro, passed away at home with his loving family at his side on Thursday, January 23, 2020. Jack will be joining his beloved wife, Carol (Jencks) Goyette whom he loved endlessly in life as... View Obituary & Service Information

The family of Mr. John Goyette created this Life Tributes page to make it easy to share your memories.

Send flowers to the Goyette family.