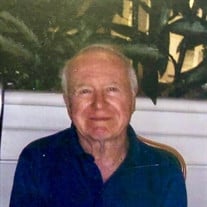 ATTLEBORO- John R. Crotty, 90, of Attleboro, passed away peacefully on Sunday, July 14, 2019, at Garden Place Healthcare in Attleboro. He was the beloved husband of the late Cecilia (DaSilva) Crotty, who passed away on December 27, 1993. Born on April 2, 1929, in Worcester, John was the loving son of the late John and Margaret (Coonan) Crotty. He grew up and was raised in the city of Worcester. John was a member of the graduating class of 1946 from St. Peter’s High School in Worcester. Following high school, he attended Worcester State Teacher’s College, where he received his Bachelor’s degree in Education. With the yearn aspiration to further his qualifications, John received his Master of Education Degree (M.Ed) from Central Connecticut State College. A man who took great pride in sharing his wealth of knowledge with others, John worked for over 30 years in the Framingham Public School system as both a teacher and a guidance counselor. Throughout his many years of teaching, he earned the reputation of being a quality educator who had the ability to inspire and teach his students. After many years of teaching, John eventually moved outside of the classroom to fill the role of a guidance counselor. In that position, he steered students along their educational path and assisted them as they graduated and moved onto the next chapter of their lives. John was an honored and proud patriot, who courageously served the country he loved so much. He was a veteran of the United States Army, who served at the height of the Korean War. John served from March of 1951 until his honorable discharge in March of 1953. During his time in the service, he achieved the rank of Corporal and he also was awarded the Army of Occupation Medal. A devout Catholic, John was a communicant of St. John the Evangelist Church and the former St. Joseph’s Church, where he would often attend daily Mass. In his spare time, John enjoyed exercising by going on long walks and swimming. He loved spending his summers off from teaching at the beaches of Onset down in Wareham and he was also an avid reader. John is survived by his daughter, Cathleen Sullivan of North Attleboro; his sister, Helen Oullette and her husband Francis of Worcester; his grandson, Andrew Sullivan; many nieces and nephews; and countless fellow educators and former students. In addition to his parents and wife, John is predeceased by his son, John E. Crotty; and his siblings, James Crotty, and Margaret Campbell. Relatives and friends are invited to attend a visitation on Tuesday, July 16, 2019, from 4 to 6 p.m. at the Duffy-Poule Funeral Home, 20 Peck Street, Attleboro. A funeral will be conducted at 10 a.m. on July 17, 2019, from the Duffy-Poule Funeral Home, followed by a Mass of Christian Burial at 11:00 a.m. in St. John the Evangelist Church, 133 North Main Street, Attleboro. Burial with United States Army military honors will follow in St. Mary’s Cemetery, North Attleboro. For directions or to send John’s family a message of condolence or remembrance, please visit duffy-poule.com

ATTLEBORO- John R. Crotty, 90, of Attleboro, passed away peacefully on Sunday, July 14, 2019, at Garden Place Healthcare in Attleboro. He was the beloved husband of the late Cecilia (DaSilva) Crotty, who passed away on December 27, 1993. Born... View Obituary & Service Information

The family of Mr. John R. "Jack" Crotty created this Life Tributes page to make it easy to share your memories.

Send flowers to the Crotty family.