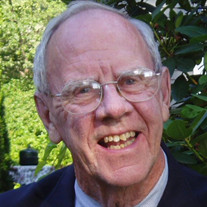 John J. Carty of Attleboro and Rockport, Massachusetts, died peacefully at home on Saturday, November 30, 2019. He was 90 years old and recently celebrated that milestone birthday with extended family at a favorite local restaurant. Born in... View Obituary & Service Information

The family of Mr. John J. Carty created this Life Tributes page to make it easy to share your memories.

Send flowers to the Carty family.