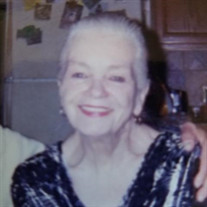 ATTLEBORO – Joan B. Masse, 84, of Attleboro, passed away on Monday, April 6, 2020 at the Attleboro HealthCare. She was the wife of the late Rene O. Masse. Born on April 3, 1936 in Attleboro, MA she was a daughter of the late Norman and Helen (Reynolds) Laprade. Joan grew up in Pawtucket, RI and was a graduate of Tolman High School. She then attended the Rhode Island School of Design. Joan worked as an illustrator for the Providence Journal and later for the Sun Chronicle. She was also a loving homemaker for her husband and children. Joan enjoyed bowling and belonged to several bowling leagues. She loved music and instilled upon her children that same love. Joan sang, played guitar and the piano. Her favorite music genre was the 50’s & 60’s especially the Beatles. Joan liked playing cards, painting, traveling and reading. She was a communicant of the former St. Mary’s Church now known as Our Lady Queen of Martyr’s Church in Seekonk. Joan is survived by her children, Greg Masse of Attleboro, Deborah Dady of Bristol, RI, Lisa Cimini of West Greenwich, RI, Michael Masse of Seekonk, Daniel Masse of East Providence, RI, John P. Masse of Attleboro and Joseph Masse of Barrington, RI; 14 grandchildren, 10 great grandchildren and her brother William Laprade of Seekonk. The family would like to thank the staff at Attleboro HealthCare for taking wonderful care of Joan in her time of need. Private funeral services were held by the family. In lieu of flowers, donations may be made to the Smile Train, a nonprofit charity providing corrective surgery for children with cleft lips and palates directly at http://www.smiletrain.org/

The family of Mrs. Joan B. Masse created this Life Tributes page to make it easy to share your memories.

Send flowers to the Masse family.