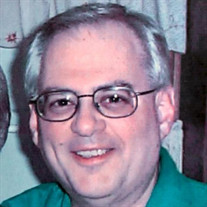 ATTLEBORO – Jerry P. Masoero, 69, of Attleboro, passed away on Saturday, April 18, 2020 at his home with his wife of 45 years by his side. He was the devoted husband of Charon M. (Johnson) Masoero of Attleboro. Born on January 20, 1951 in Pittsfield, MA he was a son of the late Peter D. and Gloria (Aresca) Masoero. Jerry grew up in Pittsfield and was a graduate of Pittsfield High School Class of 1968. He then attended United Technical Institute placing 2nd in the class of 25 studying Mechanical Drafting. His first job as a tool design draftsman had him employed at the Ingersoll-Rand Co. from 1972 until 1984 and then Automatic Machine Products Inc. from 1984 – 1992. Jerry decided in 1992 to change his career path as he became the owner and operator of Grand Slam Cards & Comics in Norton from 1992 – 1995. He then went on to become a customer service/sales associate at Toys “R” Us in North Attleboro and then a CAD Draftsman for Sargeant & Wilbur Inc. and Cosmec Inc. His most recent career was working as a purchasing agent for Sargeant & Wilbur Inc. from 2000 -2009. Jerry enjoyed golfing and bowling. He was as an avid animal lover, especially to his many cats that shared his life over the years. In addition to his wife, Jerry is survived by his sister, Carol Masoero of Worcester; his mother-in-law, Margaret Martin of Greenfield; his uncle and friend, Emilio Masoero & Lois Fitzroy both of Pittsfield; his aunt Maureen Masoero of Pittsfield; brother-in-law, Carl Johnson and his wife Janice of Wendell; also several nieces, nephews and cousins. He was the son-in-law to the late, Alan Johnson; brother-in-law to the late Dennis Johnson; nephew of the late Dominic Masoero and stepson-in-law to the late Leon Martin. The family would like to give a special thanks to all the doctors, nurses and Season’s Hospice for their care and compassion given to Jerry. Private funeral services will be held. In lieu of flowers, donations in Jerry’s name may be made to the Friends of the Attleboro Animal Shelter, PO Box 592 Attleboro, MA 02703 or The Friends of Capron Park Zoo, 201 County Street, Attleboro, MA 02703.

The family of Mr. Jerry P. Masoero created this Life Tributes page to make it easy to share your memories.

Send flowers to the Masoero family.