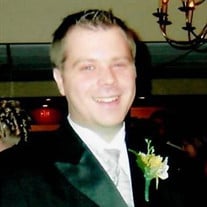 WORCESTER- Jeffrey D. Zander, 43, of Worcester, passed away unexpectedly, but peacefully in Worcester, on Monday, October 8, 2018. He was the beloved husband to Ashlye (Warner) Zander, whom he married on November 16, 2013. Born on August 21, 1975 in Providence, Rhode Island, Jeff was the devoted son to Judith (Fox) Zander and the late William Zander. Jeff took great pride in hard work and was very dedicated to his school work and academics. After graduating from high school, Jeff graduated and received his Bachelor’s degree from Bradford University. He then further his studies by attending the University of Rhode Island, where he received his Master’s degree in Human Development and Family Studies. Jeff chose to specialize his expertise and gain more education by enrolling at in a post-graduate program at Rhode Island College. Following a rigorous course load and a comprehensive curriculum plan, Jeff well-deservingly received his Certificate of Advanced Graduate Study (CAGS). A kind and caring man, Jeff truly cared for everyone and was always there for people when they needed it most. His passion and drive for helping others led to his career path of becoming a Licensed Mental Health Counselor. Jeff worked for many different organizations, where he had the honorable job of helping numerous kids, adults, and entire families through difficult obstacles in life. Outside of work and in his spare time, Jeff enjoyed photography and tending to his garden. He also loved spending time with his family and friends, who he cherished unconditionally. He will be missed by all. In addition to his wife and mother, Jeff is survived by his treasured brothers, Robert Zander and David Zander and his wife Laura; his nieces, Danielle and Kendra Zander and AmberLynn Johnson; his nephews, Dylan and Ethan Zander; and also many friends and extended family members. Jeff is predeceased by his father, William Zander. Relatives and friends are invited to attend a visitation on Saturday, October 20, 2018 from 3:00 - 4:30 p.m. immediately followed by a funeral service at 4:30 p.m. in the Duffy-Poule Funeral Home, 20 Peck Street Attleboro. Burial will take place privately in Highland Memorial Park, Johnson, RI.

WORCESTER- Jeffrey D. Zander, 43, of Worcester, passed away unexpectedly, but peacefully in Worcester, on Monday, October 8, 2018. He was the beloved husband to Ashlye (Warner) Zander, whom he married on November 16, 2013. Born on August 21,... View Obituary & Service Information

The family of Mr. Jeffrey D. Zander created this Life Tributes page to make it easy to share your memories.

Send flowers to the Zander family.