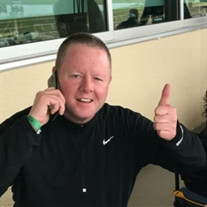 ATTLEBORO - Jeffrey S. Walsh, 54, of Attleboro, passed away suddenly, but peacefully on Tuesday, September 25th, 2018, in Phoenix, Arizona. Born as a proud member of the "10 Cote Street Gang", in Attleboro, on September 14th, 1964, Jeff was the adored son of the late Robert Thomas and Barbara Ann (Lynch) Walsh. He grew up and was raised in Attleboro. Jeff attended Deering High School in Portland, Maine, where he was a graduating member of the Class of 1983. Following high school, he attended the University of Southern Maine. Jeff worked for many years in the sales industry and recently started his own sales and marketing company in Phoenix, Arizona to be near his five children. In his spare time, Jeff enjoyed watching his favorite sports teams, the Patriots, Celtics and Red Sox. He also enjoyed traveling and his annual trips every March to the NCAA Basketball Final Four. Above all the most important thing in Jeff's life was his family and his grandchildren. His favorite saying in life to his children was "When Fear Came Knocking, I Opened the Door, And No One Was There", a true testament to the individual he was. Jeff is survived by his cherished children, Tayla Marie, Casey James, Ashley LeShell, Chelsea Lynn, and Jordan Thomas all of Surprise, AZ; the mother of his children, Michele Bacon; his loving grandchildren, Aryonah Freitas, Jaymeson Freitas, Jayveon Walsh, Cayson Payton-Walsh, Cameron Walsh, and Kai Walsh; his eight treasured siblings, Tom Walsh and his wife Linda of East Dennis, Michael Walsh and his wife Jean of Newport, RI, Maureen Houghton and her husband Brian of Attleboro, Kevin Walsh of Attleboro, Neil Walsh and his companion Anne Alves of Cape Coral, FL, Brian Walsh and his wife Sharon of Westbrook, ME, Patrice Braza and her husband Bob of Attleboro, and Dennis Walsh and his wife Nancyann of Attleboro; his proud and beloved 27 nieces and nephews; his aunt, Priscilla (Walsh) Pettit of Attleboro; numerous great nieces and nephews; and also many dear friends and extended family members. In addition to his parents, Jeff is predeceased by his brother, Stephen J. Walsh, whom passed away on August 14, 2017, and his wife Mary (Flaherty) Walsh whom passed away on November 8th, 2017. Relatives and friends are invited to attend a memorial visitation on Friday, October 12th, 2018 from 4 to 7 p.m., in the Duffy-Poule Funeral Home, 20 Peck Street, Attleboro. A memorial service will immediately follow the visitation at 7 p.m. in the funeral home. A graveside service will take place on Saturday, October 13th, at 10:00 a.m. at St. John's Cemetery, West Street, Attleboro, where Jeff will be laid to rest with his parents. In lieu of flowers, Jeff’s family has asked that you offer a simple prayer for Jeff and his soul.

ATTLEBORO - Jeffrey S. Walsh, 54, of Attleboro, passed away suddenly, but peacefully on Tuesday, September 25th, 2018, in Phoenix, Arizona. Born as a proud member of the "10 Cote Street Gang", in Attleboro, on September 14th, 1964, Jeff was... View Obituary & Service Information

The family of Mr. Jeffrey S. Walsh created this Life Tributes page to make it easy to share your memories.