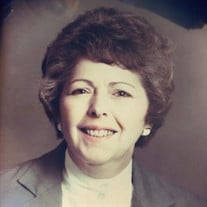 ATTLEBORO - Jeanne R. (Spignesi) MacDonald, 88, passed away on Sunday, October 11, 2020 at Our Lady of Fatima Hospital in N. Providence, RI. Mrs. MacDonald was the wife of the late Robert L. MacDonald, to whom she was married for 63 years. Born on August 26, 1932 in Deep River, Conn., she was the daughter of the late Dominick “Richard” and Minerva (Townsend) Spignesi. A 1950 graduate of Stamford High School. Mrs. MacDonald had her own Seamstress business and worked in the Attleboro School System as a Teacher’s Aide for many years. She was involved with the League of Women Voters, was very involved in her children’s sports and activities as they were growing up, volunteered as a CCD Teacher as well as at St. John’s Church; a volunteer with St. Vincent DePaul and was presented the Marian Medal. She also volunteered in the City of Attleboro. Most importantly, she was the best Mom and Friend ever. Jeanne is survived by her daughter, Maureen B. (MacDonald) Fontneau and her husband Thomas J. Fontneau and by her son, Bruce A. MacDonald and his wife Lisa Kahn, her sister, Dolores (Spignesi) Shannon of FL and her brother, William Spignesi of MO. She was predeceased by her brother, Richard Spignesi and by her son, Robert Keith MacDonald. Relatives and friends are invited to attend a visitation on Tuesday, October 20, 2020 from 4 - 7 p.m. at the Duffy-Poule Funeral Home, 20 Peck Street, Attleboro. The funeral will be conducted on Wednesday, October 21, 2020 at 9 a.m. from the Duffy-Poule Funeral Home, followed by a Mass of Christian Burial at 10 a.m. at St. John the Evangelist, 133 North Main Street, Attleboro. Burial will follow at St. John’s Cemetery, Attleboro. In lieu of flowers, donations to St. Vincent DePaul Society, c/o St. John the Evangelist Church, 1 St. John’s Place, Attleboro, MA 02703.

ATTLEBORO - Jeanne R. (Spignesi) MacDonald, 88, passed away on Sunday, October 11, 2020 at Our Lady of Fatima Hospital in N. Providence, RI. Mrs. MacDonald was the wife of the late Robert L. MacDonald, to whom she was married for 63 years.... View Obituary & Service Information

The family of Mrs. Jeanne R. MacDonald created this Life Tributes page to make it easy to share your memories.

Send flowers to the MacDonald family.