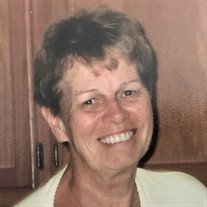 North Attleboro - Jean Marie (Curtis) Schmidt, 87, a lifelong resident of North Attleboro, passed away peacefully, at Madonna Manor in North Attleboro on Wednesday, April 6, 2022, surrounded by the love, comfort, and care of her treasured family. She was the devoted and beloved wife of 64 years to the love of her life, James C. Schmidt. Born on May 9, 1934, in North Attleboro, she was the only child born to the late Joseph F. and A. Carmel (Lynch) Curtis. A true “Townie”, Jean grew up in North Attleboro and attended St. Mary’s grammar school. She graduated from North Attleboro High School. Following graduation and with the desire to gain education, Jean attended Westbrook College in Maine. Having a belief in a fair justice system, Jean worked for the Clerk Magistrate of the 4th District Courthouse in Attleboro. As Jean and James grew their family to four children, she decided to change her career to the important role as a Homemaker. Jean took great pride in raising her children and providing a warm and welcoming home for her entire family. As her children grew up and left home, Jean admirably re-entered into public service, working for the town of North Attleboro, as a Clerk in the Assessor’s Office. She enjoyed working for the town in which she was a proud resident. In her spare time, Jean had many hobbies and interests. She was an avid bowler, in a league where she had many friends. She liked to go out to lunch with the “girls” and she had a special place in her heart for animals. Jean spent many summers with her family on Cape Cod and even had a RV where many trips and memories were made. Jean especially liked her trips to one of the happiest places on earth, Disneyworld. She was a frequent and dedicated attendee at her children’s and grandchildren’s sporting events. She was a devout fan to the St. Bonaventure University Men’s Basketball Team, where she showed her support by attending many games annually in various locations. Above all, Jean relished the time spent and memories made with her treasured family, who were the true focal point of her life. In addition to her husband James, Jean is survived by her beloved children; son Kevin Schmidt and his wife Tammi of North Attleboro, Debra (Schmidt) O’Donnell and her husband Bobby of North Attleboro, Mark Schmidt and his wife Anita of Cuba, NY, and Neil Schmidt and his wife Marji of Estero, FL; her nine adored grandchildren; her cousin’s Gary (Skip) Billingkoff and Janet Lynch and many nieces, nephews, extended family and friends. Jean was predeceased by her parents Joseph and Carmel Curtis and her father and mother in-law George and Isabelle Schmidt. The family would like to thank the staff of both Madonna Manor and Hope Hospice for their care, comfort and compassion that was provided for Jean and her family during this most difficult time. Relatives and friends are invited to attend visitation on Tuesday, April 12, 2022 from 4-7 PM at Duffy-Poule Funeral Home, 20 Peck Street, Attleboro. A Funeral will be conducted on Wednesday, April 13, 2022 at 9 AM from the Duffy-Poule Funeral Home, followed by a Mass of Christian Burial at 10 AM at The Transfiguration of the Lord Parish, St. Mary’s, North Attleboro. Burial will follow at Massachusetts National Cemetery, Bourne. In lieu of flowers, donations in Jean’s name may be made to the Friends of the North Attleboro Animal Shelter, FNAAS, 29 Poppasquash Road, North Attleboro, 02760 or to the Alzheimer’s Association at Alz.org

The family of Mrs. Jean Marie (Curtis) Schmidt created this Life Tributes page to make it easy to share your memories.

Send flowers to the Schmidt family.