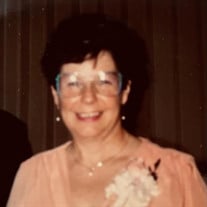 ATTLEBORO - Janet Marie (Dion) Teixeira, passed away peacefully at the age of 84, surrounded by her loving children on Saturday, August 7, 2021 at the Hope Health Hulitar Hospice Center in Providence R.I. She was the daughter of the late Victor J. Dion and the late Mary Ellen (Maloney) Dion. Janet was born on October 31, 1936 in North Attleboro, MA and spent most of her life as a North Attleboro resident, later residing at Hope Gardens in Attleboro for the past 30 years. Janet was a 1955 graduate of North Attleboro High School and worked in various positions in North Attleboro including the former McNally’s Variety Store where she enjoyed interacting and serving customers while engaging in conversations with local residents. Janet was later employed at The VH Blackinton Co. and the former L.G. Balfour Co. as an office administrator. She would later marry her husband and ultimately take on her most cherished job of all, raising her three children and loving and spoiling her Grandchildren and Great Grandchildren. Janet had an engaging smile and was an intelligent woman who always loved a good conversation and was always a reassuring voice of reason to her family during trying times. Janet loved fishing, the ocean, trips to Cape Cod with her family and summer trips with her family to Narragansett and various camp grounds. She loved arts and crafts and cooking for herself friends and family and was an avid New England Patriots fan. A woman of strong faith, she was a tireless caregiver to her siblings who would leave this world before her. Janet faced a difficult battle with a terminal illness with strength and dignity until the end and she will be dearly missed by all who knew her, especially her close friends and family. She was the wife of the late Frank Teixeira Jr. and predeceased by her siblings; the late Victor J. Dion Jr., Robert J. Dion and Marianne (Dion) Cassidy; step-father, William Precopio and brother- in- Law, James F Cassidy. She is survived by her children, Debra Eagles and her husband Steve of North Attleboro, Frank Teixeira III and his wife Gina of Attleboro and Susan Elefsiades and her husband George of Seekonk; her grandchildren, Lynn Turcotte Shuh of Voluntown CT, Tara Ward of North Attleboro, Amanda Teixeira of New York, NY, George Paul Elefsiades III of Tiverton RI, Brianna Elefsiades of Warwick RI and Tabitha Elefsiades of Pawtucket, RI; great grandchildren, Ryan Ward, Bailey Ward and Michaela Shuh and also her dear friend, Roger Froment of Attleboro. Funeral Arrangements are being handled by the Duffy-Poule Funeral Home, 20 Peck St. Attleboro and at the request of the family, there will be no calling hours. Friends and loved ones are invited to attend a Mass of Christian Burial at 10 a.m. on Friday, August 13, 2021 at the Transfiguration of the Lord Parish - Saint Mary’s Church, 14 Park St. No. Attleboro with private burial to follow at Mount Hope Cemetery & Arboretum, Attleboro Falls. In lieu of flowers, requests are being made for donations to the American Cancer Society, P.O. Box 22478 Oklahoma City, OK 73123 1-800-227-2345.

ATTLEBORO - Janet Marie (Dion) Teixeira, passed away peacefully at the age of 84, surrounded by her loving children on Saturday, August 7, 2021 at the Hope Health Hulitar Hospice Center in Providence R.I. She was the daughter of the late Victor... View Obituary & Service Information

The family of Mrs. Janet Marie Teixeira created this Life Tributes page to make it easy to share your memories.

Send flowers to the Teixeira family.