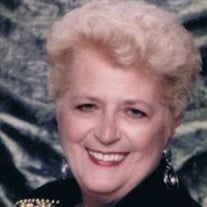 Janet T. Rousseau, age 89, passed away peacefully on Thursday, February 6, 2020 after a courageous battle from health complications. Born in Fall River, Massachusetts on January 13, 1931, she was the daughter of the late Juliette (Renaud) and Herve Rousseau. She was the beloved mother of Debra (Snowden) Lathrop of Groton, Michelle Snowden of Walpole, the late Thomas Walker Snowden and his surviving wife Debbie of Brockton and Catherine Snowden of East Bridgewater. She was the cherished grandmother of Jacqueline (Convey) Smith and her husband Stephen, Cory Convey, Courtney Ciapciak and her wife Glenda Bemis, Stephen Ciapciak Jr, Kelly Ciapciak, Thomas Snowden Jr. and his wife Courtney, Sarah (Snowden) Lopes and her husband Carlos, Christina (Snowden) Halikias and her husband Teddy and James Mellon. She was the loving great-grandmother of Patrick, Ryleigh, Tommy, Christian, Johnny, Jessica, Matthew and Myah. She was the devoted sister of Gertrude (Rousseau) Reis of Somerset MA and Bill Rousseau and his wife Marjorie of Savannah GA. Janet was predeceased by her sisters Jacqueline and Elaine and by her brothers Lee, Gene, Paul, Donald and Henry. She was also survived by many nieces, nephews, cousins and aunts. Following cremation, relatives and friends are kindly invited to attend Janet’s Memorial Visitation on March 7, 2020 from 12 to 2 at the Duffy-Poule Funeral Home, 20 Peck Street, Attleboro MA. A collation will follow the visitation from 2-4 p.m. at the Morin's Hometown Bar and Grill, 16 South Main Street, Attleboro, MA. Memorial donations in lieu of flowers can be made in Janet’s name to the Susan G. Komen Breast Cancer Foundation at https://ww5.komen.org/Donate/Donate.html.

Janet T. Rousseau, age 89, passed away peacefully on Thursday, February 6, 2020 after a courageous battle from health complications. Born in Fall River, Massachusetts on January 13, 1931, she was the daughter of the late Juliette (Renaud) and... View Obituary & Service Information

The family of Janet T. Rousseau created this Life Tributes page to make it easy to share your memories.

Send flowers to the Rousseau family.