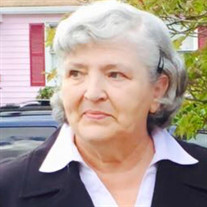 Attleboro- Janet Valerie (Fortin) Hall 75, passed away on Thursday, January 9, 2020 at Garden Place Healthcare Center, Attleboro after a two-year battle with Alzheimer’s Disease. Born on July 22, 1944 in Pawtucket, RI, she was a daughter of the late Paul H. Fortin and Ruth m. (Jensen) Fortin. She was a 1962 graduate of Attleboro High School and former payroll coordinator with Rite Aide until her retirement. She loved bowling, Christmas and yard sales. Janet is survived by daughters, Kathleen Dolloff and husband David of Cumberland, RI, Barbara LaBree and husband Ronald of Pawtucket, RI; her sons, David Hall and wife Alyssa of Cumberland, RI and Michael Hall of Lincoln, RI; grandchildren Ashley-Lyn, Kyle, Cailee, Timothy, Kamryn, Tyler, Samantha, Andrew, Jesse, Ryan, Zachary and Justin; her brother, Paul Fortin of Attleboro and many nieces, nephews and cousins. She was the sister of the late Diane Fortin Knepp and great-grandmother to the late Caden Robert Gustafson. Relatives and friends are invited to attend a visitation from 5 - 7 pm on Monday, January 13, 2020 at the Duffy-Poule Funeral Home, 20 Peck Street, Attleboro, MA. A funeral will be held on Tuesday, January 14, 2020 at 9 am from the funeral home followed by a Mass of Christian Burial at 10:00 a.m. in the St. John the Evangelist Church, 133 North Main St., Attleboro. Burial will take place at a later date in Notre Dame Cemetery, Pawtucket. In lieu of flowers donations in Janet’s name can be made to the Alzheimer’s Association at Alz.org

The family of Mrs. Janet V. Hall created this Life Tributes page to make it easy to share your memories.

Send flowers to the Hall family.