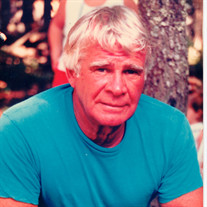 ATTLEBORO - James H. Holt, 94, of Attleboro, passed away on Tuesday, January 15, 2019 at the Hope & Hospice & Palliative Care, Providence, RI. Born on February 10, 1924 in Attleboro, MA, he was a son of the late Thomas and Mary (Kennedy) Holt. Jim grew up in Riverside, RI with his siblings, Herbert, Thomas, Irene, Mary, Ruth and Pamela. James proudly served in the United States Naval Construction Battalion, better known as the Seabees from 1943 – 1946. He started H&R Auto Repair in 1946 and joined the NASCAR circuit in 1948 and raced all over northeast Canada and New York. Jim was honored by the Living Legends of Auto Racing Memorial Brick Walk of Fame featuring inscribed bricks honoring the pioneers of auto racing. Jim retired to Little Torch Key, Florida and restored Volkswagen convertible bugs. Jim enjoyed spending time with family at his summer home in Mashpee where he enjoyed boating. He was a lifetime member of the Attleboro Elks Lodge #1014. He is survived by his three children, Thomas Holt, James Holt Jr. and Linda Desmarais; five grandchildren and with great grandchildren. A graveside service with military honors will be held at 10 a.m. on Friday, January 25, 2019 in the St. John’s Cemetery, West Street, Attleboro. In lieu of flowers, donations in Jim’s name may be made to the Juvenile Diabetes Research Foundation, 26 Broadway, 14th Floor, New York, NY 10004 or directly at https://www.jdrf.org/donate/

The family of Mr. James H. Holt created this Life Tributes page to make it easy to share your memories.

Send flowers to the Holt family.