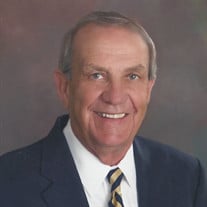 NORTH ATTLEBORO - James S. Brennan, 84, of North Attleboro, passed peacefully at home surrounded by his family on November 7, 2020. He was the beloved husband of Priscilla (Wright) Brennan, with whom he celebrated 62 years of marriage. Born in Attleboro on October 6, 1936, he was the son of the late Raymond and Agnes (Levis) Brennan. Jim was a graduate of Coyle Cassidy High School, where he was an outstanding athlete, and a graduate of the University of Notre Dame. He remained an active alumnus and lifelong fan of the Fighting Irish. After college he served proudly as a member of the United States Marine Corps. He joined his father and uncle in the Jeweled Cross Company in North Attleboro, and later became President and sole operator until retirement. He was very proud of building the company and establishing a respected national sales force. He was very active in the church goods community and served as President of the National Church Goods Association. He enjoyed sailing and racing on Narragansett Bay and vacationing with Priscilla in St. Thomas. Jim was an avid golfer and longtime member of Highland Country Club in Attleboro, where he also served as President. His greatest joy was in spending time with his family. In addition to his wife Priscilla, Jim is survived by their five children, Colleen Brennan-Martinez and her husband Fernando J. Martinez MD, of New York City, New York, James S. “Jay” Brennan II and his wife Cynthia Brennan of North Attleboro, Patricia A. Diamond and her husband David of North Attleboro, Erin M. Beyer and her husband Gary of North Attleboro, and Kathleen M. Augusto and her husband Victor of North Attleboro, their grandchildren, Margaret Martinez and her husband Drew Teer of Atlanta, GA, Fernando Martinez and his wife Katie of Medford, James S. Brennan III of North Attleboro, Brianne Brennan of North Attleboro, Sean Diamond of North Attleboro, Amanda Diamond of Newton, Derek Beyer of Plymouth, MA., Deirdre Augusto of North Attleboro, Lisa O’Neill and her husband Ross of Attleboro, Justin Augusto and his wife Amanda of North Attleboro. He is also survived by four great grandchildren, Catherine Teer, Layla and Cole Augusto, and Miles O’Neill, as well as many nieces and nephews. He was the brother of Maureen Browne and her husband Greg of St. Louis, MO, Catherine Barone of Attleboro and the late Louise Siddall. Due to COVID19 restrictions, all funeral arrangements under the direction of the Duffy-Poule Funeral Home are private. The funeral will be live-streamed and available to view at 11 a.m. on Wednesday, November 11th by going to the following link https://www.facebook.com/Transfiguration-of-the-Lord-Parish-North-Attleborough-106529317647894 In lieu of flowers, donations in Jim’s memory may be made to Bishop Feehan High School, care of Duffy-Poule Funeral Home, to establish a scholarship fund that will assist a Saint Mary’s Sacred Heart student as they continue their education at Bishop Feehan High School. This legacy recognizes Jim’s unending commitment to Catholic Education which he supported as an active fundraiser throughout his life.

NORTH ATTLEBORO - James S. Brennan, 84, of North Attleboro, passed peacefully at home surrounded by his family on November 7, 2020. He was the beloved husband of Priscilla (Wright) Brennan, with whom he celebrated 62 years of marriage. Born... View Obituary & Service Information

The family of Mr. James Stephen Brennan created this Life Tributes page to make it easy to share your memories.

Send flowers to the Brennan family.