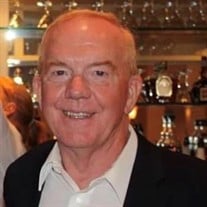 ATTLEBORO – James Kingston Beith Jr., 70, of Attleboro, passed away peacefully at his home surrounded by his loving family on Friday, March 20, 2020. He was the devoted husband of Linda (Lapierre) Beith of Attleboro. Born on July 20, 1949 in Brookline, MA he was a son of the late James K. Sr. and Eleanor (Peterson) Beith. Initially living in Randolph, MA, James’ family moved to Stoughton, MA and then spent the majority of his youth in Canton from 1959 – 1974. He was a graduate of Canton High School Class of 1968. He then attended Bridgewater State College and graduated in 1974 with a Bachelor’s Degree in Political Science. After his marriage to Linda, James resided in North Attleboro and Attleboro, spending the last 10 years in Bristol, RI and then returning back to North Attleboro in November 2019 to be close to family. James’ first job after graduating college was working for the Metropolitan Life Insurance Company. He then accepted a job at South Shore Lincoln Press as a computer systems administrator followed by 16 years as a systems analyst at the Robbins Company in Attleboro. For the remainder of his career he worked as a contract systems analyst/programmer for the Key Corporation at Boston Financial Data Systems in Braintree. James coached softball for the Plainville Athletic League, South Attleboro Girls Recreation Association and he coached football for the White Hawks in South Attleboro. A natural athlete, he enjoyed playing softball for the Robbins Company team. James attended Trinity Episcopal Church in Canton and the Oldtown Church – First Congregational Church in North Attleboro. He loved playing and coaching baseball and softball, reading history and spy/war/detective novels, playing chess, listening to music, especially the 50’s and 60’s, cheering on the Red Sox and New England Patriots and working in the yard. He loved a good debate! Most of all, James enjoyed spending time with his family. In addition to his wife, James is survived by his children, Michaela Goodwin and her husband David of Cape Elizabeth, ME, Patrick Beith and his wife Janet of North Attleboro, Kathleen “Kate” Kaschenbach and her husband Mark of Ridgewood, NJ and Morgan Tower and her husband Christopher of Lantana, TX; his grandchildren, Brady and Halston Goodwin of Cape Elizabeth, ME, Donovan, James and Cade Beith of North Attleboro, Liliana, Colton, Minka and Jagger Kaschenbach of Ridgewood, NJ and Harrison, Charlotte, Paisley and Remington Tower of Lantana, TX; his siblings, Bonnie (Beith MacKinnon) Triplett and her husband Gary of Efland, NC, Eric Beith and his wife Rosalie of Weston and Nancy Beith of San Francisco, CA; his father-in-law and mother-in-law, Armand and Loretta Lapierre of Attleboro; brothers-in-law, Paul Lapierre and his wife Elaine of Attleboro, Peter Lapierre of Lake Panasoffkee, FL and Christopher Lapierre of Barrington, RI; his sisters-in-law, Susan Keith of Rehoboth, Carol Glen and her husband George of Holiday, FL, Lauren Ringuette and her husband Paul of Palm Harbor, FL, Michele Doherty and her husband of Brendan of Wakefield, RI and Maria Macdonald and her husband Mitchell of North Attleboro; also many beloved cousins, nieces and nephews. James was the grandson of the late James and Florence Beith and Ernest and Selma Peterson; brother-in-law to the late Bradley Keith and uncle to the late Eric Cooper. The family would like to extend a sincere gratitude to the Continuum Care Hospice staff and Dr. Matthew Brumbaugh for their caring and compassion. Private services were held by the family and burial took place at the Knollwood Memorial Park Cemetery in Canton. In lieu of flowers, donations in James’ name may be made to the Alzheimer’s Association directly at https://www.alz.org/

ATTLEBORO &#8211; James Kingston Beith Jr., 70, of Attleboro, passed away peacefully at his home surrounded by his loving family on Friday, March 20, 2020. He was the devoted husband of Linda (Lapierre) Beith of Attleboro. Born on July 20,... View Obituary & Service Information

The family of Mr. James K. Beith Jr. created this Life Tributes page to make it easy to share your memories.

Send flowers to the Beith family.