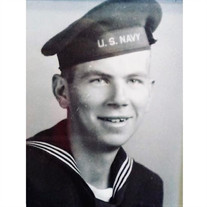 PLAINVILLE – Howard R. Walsh Jr., 91, of Plainville passed away surrounded by his loving family on May 28, 2019 in the HopeHealth Hulitar Hospice Center, Providence, RI. He was the loving husband of 56 years to Annette Y. (Houle) Walsh of Plainville. Born on January 26, 1928 in North Attleboro, MA he was a son of the late Howard R. Sr. and Mildred M. (Marble) Walsh. Howard Jr. was raised and educated in North Attleboro and was a graduate of North Attleboro High School class of 1946. He proudly served in the United States Navy aboard the USS Johnston (DD-821) a Fletcher-class destroyer during World War II. He was a recipient of the World War II Victory Medal and the American Area Medal. After his honorable discharge from the Navy in 1947, Howard became a plumber and pipefitter apprentice in 1948. He was employed locally until 1967 at which point, he joined the United Association of Plumbers and Pipefitters Local 51 out of Providence. He worked for the Union for 18 years and then became self-employed from 1985 until his retirement in 1993. Howard was a member of the American Legion Auburn Post 20 out of Cranston, RI, Past Commander of the VFW Gilbert Perry Post 115 in Attleboro and the Attleboro Elks Lodge No. 1014. In his spare time, Howard enjoyed square dancing, camping and woodworking. In addition to his wife, Howard is survived by his children, Susan A. Sorel and her husband John of Plainville, Richard P. Walsh and his wife Nichelle of South Attleboro, Michael J. Walsh and his companion Lisa both of Coventry, RI, Mark H. Walsh and his wife Joanne of Litchfield, NH, Shelia P. Beggs and her husband David of Attleboro and Steven H. Walsh and his wife Deborah of South Attleboro; 13 grandchildren, 3 great grandchildren and several nieces and nephews. He was the brother of the late Barbara M. Isakson. Relatives and friends are invited to attend a memorial visitation from 4 -6 p.m. on Tuesday, June 4, 2019 in the Duffy-Poule Funeral Home, 20 Peck Street, Attleboro immediately followed by a funeral home service at 6 p.m. A burial with military honors will be held at 1:15 p.m. on June 5, 2019 in the Massachusetts National Cemetery, Bourne. In lieu of flowers, donations in Howard's name may be sent to the American Heart Association, P.O. Box 417005, Boston, MA 02241.

PLAINVILLE &#8211; Howard R. Walsh Jr., 91, of Plainville passed away surrounded by his loving family on May 28, 2019 in the HopeHealth Hulitar Hospice Center, Providence, RI. He was the loving husband of 56 years to Annette Y. (Houle) Walsh... View Obituary & Service Information

The family of Mr. Howard R. Walsh created this Life Tributes page to make it easy to share your memories.