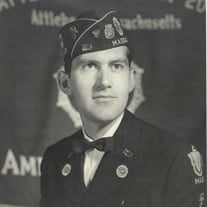 Howard Edwin Johnson, of Attleboro, passed away peacefully on Thursday, April 1, 2021 at 89 years of age. Son of the late Ada (Chadwick) and John Johnson. Loving father of David B. Johnson and his wife Anne of North Attleboro, Charles C. Johnson and his wife Lynn of Woodland, CA, and the late Clifford H. Johnson. Cherished grandfather to Ryan Johnson of Florida, Jesse Johnson of Waterford, MI, Eric Johnson of Attleboro and Andrew Johnson of Fairfax, VT. Great-grandfather to Noah, Ella, Kendal, Keira, Elijah, Matilda and Juniper. Beloved companion to Lilian Pierce. Adored brother to the late Robert L. Johnson, Roger M. Johnson, Raymond R. Johnson, Thomas A. Johnson, Norman Johnson, Henry Johnson and Bruce F. Johnson. Former husband to the late Sondra D. (Hunter) Johnson. Howard was born and raised in Attleboro where he attended Attleboro schools. He enlisted in the US Army and became a Sergeant stationed in Italy during the Korean conflict as military transport driver. After returning from military service, he worked at Thompson Chemical Co. until an explosion caused its closure. Howard went on to drive 18-wheelers for Tip Top Bakery, and later for Hostess Bakery. He was a long-time organizer and member of Teamsters Local 64. Howard was a VFW Past Post Commander. In 2019, he was honored for over 64 years of service. He was also a member of the American Legion. In 2007, he was awarded the Certificate for Outstanding Contributor to Programs and in 2019, he was honored by the House of Representatives, for 64 years of dedicated and committed service. Howard was dedicated to his fellow Veterans, providing transportation to appointments, visiting shut-ins, selling poppies for the annual drive and placing flags on graves of those who served. He was a loving father and grandfather, and enjoyed spending time with his family. In lieu of flowers, donations in Howard’s name, may be made to VFW Post 115 - Attleboro, 122 Park St., Attleboro, MA 02703 or Community VNA of Attleboro, 10 Emory St., Attleboro, MA 02703 or www.communityvna.com. A Graveside Service with Military Honors will be held on Saturday, April 10, 2021 at 10:30 AM at North Purchase Cemetery, 825 N. Main St., Attleboro, MA. For the safety of those who wish to pay their respects, please do so in accordance with CDC, Federal and State guidelines including social distancing and the use of face masks.

The family of Mr. Howard Edwin Johnson created this Life Tributes page to make it easy to share your memories.

Howard Edwin Johnson, of Attleboro, passed away peacefully on...

Send flowers to the Johnson family.