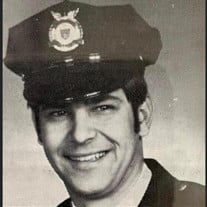 Capt. George G. Bussiere of Attleboro, passed away peacefully on Monday, November 8, 2021 at 74 years of age. Beloved husband of Denise (Racine) Bussiere of 48 years. Son of the late Betty Jane (Gill) and George E. Bussiere, Jr. Loving father of Keith Bussiere and his wife Nicole of Attleboro and Kendra (Bussiere) Jones and her husband Brian of Johnston, RI. Cherished grandfather of Jacob, Quinn, Charlotte, Matthew, and Olivia. Adored brother of Cynthia Pierce and her husband Richard of Attleboro; Michael Bussiere and his wife Suki of Hinesville, GA; Mary Jane Quinlan Bussiere of Saugus; Thomas Bussiere and his wife Diane of New London, CT; Melissa Delforte and her husband Joseph of Canadaigua, NY; and the late John Bussiere. George also leaves many nieces and nephews, cousins and friends. George was born in Attleboro and became a lifetime resident. He was a graduate of Attleboro High class of 1965. He went on to serve in the U.S. Army as a Specialist 5 from 1965-1971. He then attended the Police Academy graduating in May 1971. He later went on to pursue a Bachelor’s Degree in Criminal Justice from Roger Williams University in 1977. George proudly serviced in the Attleboro Police Department for over 38 years from November 1970 – July 2009 retiring as a Police Captain. He enjoyed Boston sports, college football, golfing, history, reading, had a love of law, and most of all, spending time with his grandchildren! Relatives and friends are invited to attend visitation on Monday, November 15, 2021 from 4-6:30 PM at Duffy-Poule Funeral Home, 20 Peck Street, Attleboro. A Memorial Service will take place at 6:30 PM at the funeral home. A Graveside Service will take place on Tuesday, November 16, 2021 at North Purchase Cemetery, 825 N. Main Street, Attleboro at 11 AM. In lieu of flowers, donations in George’s name, may be made to the American Cancer Society at www.cancer.org or to Beacon Hospice, 182 N. Main Street, Fall River, MA 02720.

The family of Capt. George G. Bussiere created this Life Tributes page to make it easy to share your memories.

Send flowers to the Bussiere family.