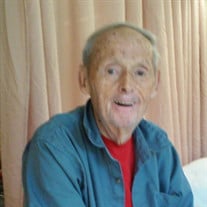 Attleboro - Frederick Earl Jerauld, 89, of Attleboro, died Wednesday morning, November 25th at Sturdy Memorial Hospital. He was the husband of Janet Lillian (Bisson) Jerauld and a lifelong resident of Attleboro. Freddie Jerauld was born on November 19, 1931 in South Attleboro, a son of the late Raymond Everett and Gertrude Lillian (Cheney) Jerauld. Before retiring, he worked at Leavens Manufacturing as a polisher for 40 years and Lenn Arts for 16 years. He served in the U.S. Air Force during the Korean War and he was a member of the VFW Post 115, American Legion Post 312, and the Attleboro Elks lodge 1014 where he enjoyed playing cards and horseshoes. He also without fail, routed for the Cleveland Browns. He is survived by one sister, Patricia Adams of Muskogee, OK and was the brother of the late Lillian, Raymond, George, Alice, Alton, Norman, Jessie, Eleanor and a childhood friend that became family, Andy Figuerado. Freddie is also survived by his three daughters. Dorie Monse and her husband Terry, Pauline Dion and Dyanne Buckman and her husband Mark Campbell, all from Attleboro; 7 grandchildren, 5 great grandchildren and a multitude of nieces and nephews. Services will be held privately due to COVID-19. His final resting place will be alongside his parents in the Seekonk Cemetery on Newman Avenue in Seekonk. In lieu of flowers, donations in Fred’s name can be made to the Attleboro Council on Aging Department, 25 S Main Street, Attleboro, MA 02703.

The family of Mr. Frederick Earl Jerauld created this Life Tributes page to make it easy to share your memories.

Send flowers to the Jerauld family.