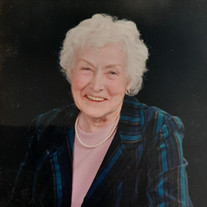 ATTLEBORO – Florence Shirley Birch, 93, of Attleboro, passed away on Tuesday, December 8, 2020 at her home surrounded by her loving family. She was the wife of the late Francis P. Birch. Born on October 10, 1927 in South Deerfield, MA she was daughter of the late Harrison G. and Florence E. (Clark) Brown. Shirley grew up in Attleboro and was a graduate of Attleboro High School. She briefly worked as a bookkeeper but was primarily a homemaker to her family. Shirley was a longtime communicant of St. John the Evangelist Church in Attleboro and enjoyed birdwatching, genealogy, sewing, sightseeing, playing cards and spending time with family and friends. Shirley is survived by her children, David Birch of White River, VT, Dennis Birch of Attleboro, William Birch of Attleboro, Patrick Birch of Attleboro, Peter Birch of Seekonk and Maureen Birch of Pawtucket, RI; her two nieces, Paula Durkee of Attleboro and Elaine Finn Charbonnier of Attleboro; her two nephews, John Redding of Attleboro and Brian Redding of Warren, RI. She was the mother of the late Terence Birch and sister of the late Dorothy Redding, Richard Brown and Robert Brown and aunt of the late Bradley Redding. The family would like to extend their appreciation to the Visiting Angels of North Attleboro and the CVNA of Attleboro Hospice Care for the care and compassion shown to Shirley. A private graveside service was held at the St. John’s Cemetery, West Street, Attleboro, MA. In lieu of flowers, donations may be made to the American Cancer Society, 30 Speen St., Framingham, MA 01701, or directly at donate.cancer.org, or the CVNA of Attleboro Hospice Care, 10 Emory Street, Attleboro, MA 02703

ATTLEBORO &#8211; Florence Shirley Birch, 93, of Attleboro, passed away on Tuesday, December 8, 2020 at her home surrounded by her loving family. She was the wife of the late Francis P. Birch. Born on October 10, 1927 in South Deerfield,... View Obituary & Service Information

The family of Mrs. Florence Shirley Birch created this Life Tributes page to make it easy to share your memories.

Send flowers to the Birch family.