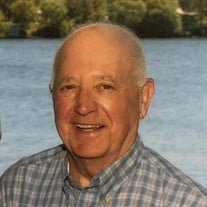 ATTLEBORO - Dr. Fiore R. Rullo was born in Lawrence Mass, son of immigrant parents Fiore and Emilia Rullo. Upon graduation from Lawrence High School he was accepted into the U.S. Air force Aviation Cadet program. He was stationed for one year on Okinawa. Following his honorable discharge from the 8th Air Force he enrolled at Boston University and was graduated Cum Laude after three years. He was elected to Phi Beta Kappa in his senior year at Boston University. Dr. Rullo was accepted at Boston University School of Medicine and following graduation he had post graduate training at Boston City Hospital, Upstate New York Medical Center at Syracuse, and a two-year Fellowship in Medicine at Lahey Clinic in Boston. He was an associate member of the American College of Cardiology. He was co-author of three articles published in medical journals including The New England Journal of Medicine. He began his medical practice of Internal Medicine in Attleboro and was very active in hospital affairs, having served as Chief of Medicine, President of the Medical staff, Chief of Electrocardiography, as well as chairman and member of several other hospital committees. He was awarded a medal for meritorious service by the American Heart Association for his participation in the instruction of police and fire departments in emergency medical care and his active involvement with Dr. Joseph Colman in setting up the cardiac portion of the first intensive care unit at Sturdy Memorial Hospital, Attleboro, MA. Dr. Rullo’s hobbies and interests include Airstream travel trailer vacations over the United States and Eastern Canada, golf, which he continued until age 82, a large vegetable garden, stained glass lamps and projects for his family, clamming at Nauset beach on Cape Cod, skiing, wood working, walking and biking on the Cape Cod Rail Trail. He enjoyed his home computer, and building and repair work inside and outside his homes in Attleboro and Harwich on Cape Cod. He was a communicant at St. John The Evangelist Church in Attleboro, Massachusetts, later at Pius the Tenth Church in Yarmouth, Massachusetts, and more recently again at St John the Evangelist Church in Attleboro. He was a recipient of the Marion Medal for his work in the Pre-Cana program. He leaves behind his wife Mary of 65 years, and six children. Steven Rullo and wife Tina of North Attleboro, Susan Wendell and husband Neil of Wakefield, RI, Patricia Rullo of Attleboro, Thomas Rullo and wife Amy of Mashpee, Dr. David Rullo and wife Sande, of Mansfield and John Rullo of Cumberland RI: 9 Grandchildren and 2 Great-Grandchildren; also are 3 brothers, Modestino Rullo, deceased, Frank Rullo of North Andover MA, deceased, Carl Rullo of Plaistow N.H., and sister Josephine Nicoletti of Satellite Beach, FL. Relatives and friends are invited to attend a visitation from 4 – 8 p.m. on Wednesday, November 6, 2019 in the Duffy-Poule Funeral Home, 20 Peck Street, Attleboro. A funeral will be conducted on Thursday, November 7 at 10 a.m. from the Duffy-Poule Funeral Home, followed by a Mass of Christian Burial, at 11 a.m., in St. John the Evangelist Church, 133 North Main St., Attleboro. Burial with military honors will follow at 1:30 p.m. in the Massachusetts National Cemetery, Bourne. In lieu of flowers, donations in Dr. Rullo’s name may be made to the Community VNA Hospice Care, 10 Emory Street, Attleboro, MA 02703.

ATTLEBORO - Dr. Fiore R. Rullo was born in Lawrence Mass, son of immigrant parents Fiore and Emilia Rullo. Upon graduation from Lawrence High School he was accepted into the U.S. Air force Aviation Cadet program. He was stationed for one year... View Obituary & Service Information

The family of Dr. Fiore R. Rullo created this Life Tributes page to make it easy to share your memories.

Send flowers to the Rullo family.