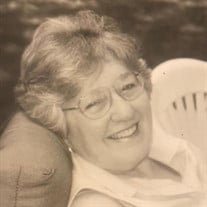 FOXBOROUGH - Eugenia A. Piggott, better known as Jean, passed peacefully on Wednesday, January 20, 2021 at the age of 99. She had been a resident of the Doolittle Home in Foxboro, for the past 6 years. She was the wife of the late Thomas A. Piggott, former Mayor of the City of Attleboro, to whom she had been married for 64 years. Born on March 16, 1921 in Greenville, North Carolina she was the daughter of Berry George Abeyounis and Bessie Idel (Essey) Abeyounis of Rockingham North Carolina. She was the sister of the late Morris Abeyounis who died during WWII and the sister of the late Berry George Abeyounis and Pauline Burkett. Jean was raised in the college town of Greenville, North Carolina and was part of a musical family having learned to sing from her mother. At age six she and her sister sang in the college musical Babes in Toyland. Jean along with her sister and two brothers sang as a quartet in High School. In high school she performed in the musical “Makado” and had the lead role during her senior year in “The Traveling Minstrel.” After high school, Jean entered East Carolina Teachers College as a Music Education Major where she developed her soprano voice. She was the lead soprano in the first college opera “Martha”. All through here college career she performed in many concerts, clubs, weddings and arias. She performed at St. Peter’s Catholic Church in Greenville where she was a communicant. Jean received her B.A. degree in music in 1943. The night before graduation she was singing at the women’s club entertaining the WWII service men and at that time, she met her future husband, Tom, who was serving in the Marines. She married Tom on May 4, 1944 at St. Peters Catholic Church, Greenville. She was separated from Tom for two and half years while Tom was serving in the Pacific. After the war, they moved to Pawtucket, R.I. working and raising a family while Tom attended Brown University. From Pawtucket she moved to Attleboro where she resided for 28 years. Jean was the choir director at St. Theresa’s Church in South Attleboro for 25 years and in 1962 she was hired as a music teacher in the Attleboro Schools, teaching in the elementary and junior high schools for 23 years until retirement. She served as the First Lady of Attleboro from 1965 to 1971 during Tom’s tenure as mayor, and she later became a communicant of St. Marks in North Attleboro, where she participated in the choir. Since 1970 she has been a lifelong member of the Chaminade Club in Attleboro, serving as chairman of scholarship auditions for young musicians and Vice President for many years. During her retirement, she and her husband sang for various organizations and nursing homes and wrote a Christmas song called “Best Time of the Year”. She was an excellent cook specializing in Lebanese foods and recipes she learned from her mother. She would often prepare these foods and have the entire family over during the holidays. It was an attraction that everyone in the family looked forward to. She knew how to live rich with family, always caring for others first. During the early years of raising a family she mastered sewing, making all her daughters’ clothes for school. She enjoyed quilting, crocheting and continued to play American Song Book piano and sing until her death. Jean remained active and in touch with many friends on a daily basis until her death. She is survived by five children and their spouses, Thomas of St. Petersburg, FL. and his wife Marilyn, Donnelle Davis of Attleboro, and her husband Michael Cryan, George and his wife Cynthia Eddy of Attleboro, Paula Gibeau and her husband Carl of Seekonk, Shelley Anne Roberts and her husband Bill of Weymouth; 11 grandchildren, Nicole Costa and her husband Michael, Jennifer Hunter, Christopher Piggott and his wife Susie, Carrie Ford and her husband Paul, Tammy Bottomley and her husband Griffin, Joel Piggott and his wife Rashae, Mallory Connolly and her husband James, Ryan Gibeau and his wife Brittany, Neal Gibeau, Nathan Roberts and his wife Katie, Daniel Roberts; her 12 great grandchildren and also survived by a sister-in-law, Phyllis Abeyounis of Wilmington, N.C. and many nieces and nephews. She was the grandmother of the late Jeffrey Hunter. A private funeral service and Christian burial will take place at the North Purchase Cemetery, Attleboro. In lieu of flowers a donation may be made to the Attleboro Interfaith Collaborative, PO Box 368, Attleboro, MA 02703, where they support food needs throughout the greater Attleboro area.

FOXBOROUGH - Eugenia A. Piggott, better known as Jean, passed peacefully on Wednesday, January 20, 2021 at the age of 99. She had been a resident of the Doolittle Home in Foxboro, for the past 6 years. She was the wife of the late Thomas A.... View Obituary & Service Information

The family of Mrs. Eugenia A. Piggott created this Life Tributes page to make it easy to share your memories.

Send flowers to the Piggott family.