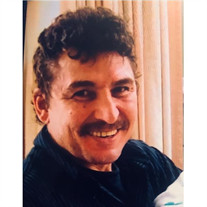 Eugene A. Goad, 45, of Attleboro, passed away unexpectedly on Monday, August 19, 2019 in Warwick, RI. Born on June 9, 1974, in Fall River, MA he was the son of Theresa Bettencourt-Weeks. Eugene graduated from Attleboro High School in 1992 and went on to work for A-1 Paving and Ryan Asphalt & Paving. He also worked as a self-employed handy-man for many years. Eugene enjoyed woodworking, attending concerts and was an avid New England sports fan especially the New England Patriots. Eugene loved spending time with his children, family and many friends. He always had a knack for making people smile and was always more interested in helping others than himself. In addition to his mother, Eugene is survived by his son, Joshua Patrick Goad and his daughter, Elizabeth Goad; his brothers, Ralph Reed and his partner Alice (Lou) Brederson of South Attleboro, Albert Reed and his wife Cindy of Seekonk, Aiden Weeks of South Attleboro; his sisters, Renee Lumb and her husband Bill of South Attleboro, Tracy Reed of South Attleboro, Sandra Torres and her husband Rafael of Worcester. Eugene also leaves behind many nieces and nephews, Shain Vandal, Jamie Reed, Amanda Flynn, Adam Reed, Hailey Reed, Savanna Swift and John Beaulieu, many cousins, aunts, uncles and other extended family members. Eugene is predeceased by his grandparents, Eugene and Lucy D. Bettencourt; his uncles David and Eugene Bettencourt and his aunt Rosemary Baggson. Visiting hours will be held on Monday, August 26, 2019 from 5:00 – 7:30 p.m. in the Duffy-Poule Funeral Home, 20 Peck St. Attleboro, MA. A funeral home service will immediately follow at 7:30 p.m. Burial will take place privately at a later date. In lieu of flowers, donations in Eugene’s memory may be made to the to St. Jude Children’s Hospital at https://www.stjude.org or any other charity of your choice.

Eugene A. Goad, 45, of Attleboro, passed away unexpectedly on Monday, August 19, 2019 in Warwick, RI. Born on June 9, 1974, in Fall River, MA he was the son of Theresa Bettencourt-Weeks. Eugene graduated from Attleboro High School in 1992... View Obituary & Service Information

The family of Mr. Eugene A. Goad created this Life Tributes page to make it easy to share your memories.

Eugene A. Goad, 45, of Attleboro, passed away unexpectedly on...

Send flowers to the Goad family.