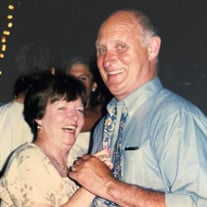 ATTLEBORO - Ellen Mulvaney Kielty, 80, longtime resident of Attleboro passed away surrounded by her loving family on July 8, 2019 in the Life Care Center of Attleboro. She was the loving wife of the late Thomas Kielty. Born on January 21, 1939 in South Orange, NJ, she was a daughter of the late Francis and Marie (Meade) Mulvaney. Ellen was raised in South Orange, NJ with her twin brother Richard Mulvaney and older brother Charles. She worked as a facilities supervisor at the New Jersey Bell Telephone prior to relocating to Attleboro and becoming a full-time mom to her four children. Ellen enjoyed cooking, sewing, knitting, traveling, reading, painting, her book and investment clubs, spending time with her beloved “Big Tom”, summers in NJ with her family and old friends, spending time at the beach, particularly 4th of July in Narragansett, RI and most importantly spending time with her children and grandchildren. She is survived by her children, Thomas Mulvaney Kielty of Seekonk, MA, Tracey Anne Kielty Smith and her husband Allen of San Antonio, TX, Kevin Patrick Kielty and his wife Kathy of Narragansett, RI and Michael Andrew Kielty and wife Kelly of Franklin MA. In addition to her children she is survived by 8 grandchildren; Sean, Aidan and Sierra Kielty of Narragansett, RI , Caroline, Meaghan, and Wyatt Smith of San Antonio, TX and Owen, Ryan and Quinn Kielty of Franklin, MA. Ellen is predeceased by her two brothers Charles Mulvaney and Richard Mulvaney and her two brother-in-law’s, Gerald Kielty and Richard Kielty. Relatives and friends are invited to attend a visitation on Thursday, July 11th from 5-8 p.m. in the Duffy-Poule Funeral Home, 20 Peck Street, Attleboro. A funeral will be conducted at 9 a.m. on July 12th, from the Duffy-Poule Funeral Home, followed by a Mass of Christian Burial at 10:00 a.m. in St. John the Evangelist Church, 133 North Main Street, Attleboro. Burial will follow in North Purchase Cemetery, Attleboro. In lieu of flowers donations may be made to the Parkinson's Foundation 200 SE 1st Street Suite 800, Miami, FL 33131 or directly at https://www.parkinson.org/ A special thanks to the Capron Unit staff at Life Care Center, Attleboro, MA who took outstanding care of Ellen in her later years.

ATTLEBORO - Ellen Mulvaney Kielty, 80, longtime resident of Attleboro passed away surrounded by her loving family on July 8, 2019 in the Life Care Center of Attleboro. She was the loving wife of the late Thomas Kielty. Born on January 21, 1939... View Obituary & Service Information

The family of Mrs. Ellen Kielty created this Life Tributes page to make it easy to share your memories.

Send flowers to the Kielty family.