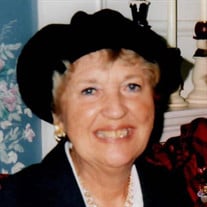 Attleboro – Eleanor Rose (Fontaine) Kennedy, 92, of Attleboro, passed away peacefully with her daughters by her side on Saturday, April 4, 2020. She was the loving wife of the late Norman Earle Kennedy Sr. Born on December 2, 1927 in Attleboro, MA, she was a daughter of the late Elphege E. and Mary Rose (Arsenault) Fontaine. Eleanor grew up in Attleboro and was a graduate of Attleboro High School. She worked as a telephone operator in her early years. After marrying she lived in many parts of the country while her husband served in the U.S. Air Force before settling back in Attleboro. A homemaker for many years, Eleanor, enjoyed her home, decorating, cooking, knitting, gardening and gathering family for holidays. She volunteered for many local groups including the Ladies Guild at St. John's Church, The American Cancer Society and The Heart Association. Later, Eleanor worked as a receptionist for Waste Management Systems for 10 years before retiring. Her love of traveling has brought her to many places including the Caribbean with her husband and several other couples, Hawaii, Ireland and a special trip to Paris, France with her daughter, Cynthia. She also enjoyed time spent on the Cape and walking the canal. Eleanor is survived by her three daughters, Linda Newbury of North Attleboro, Cynthia Cote and her husband Al of Franklin and Kathleen Drapeau of North Attleboro; nine grandchildren and 7 great grandchildren; and her brother, Eugene Fontaine of Bridgewater. She was the mother of the late Norman E. Kennedy Jr., sister of the late Dolores Cole and fiancée of the late Grover C. Young. As a homemaker Eleanor's recipe box was an integral part of her day. Inside the cover was taped this message a one that she embraced each day: "Kindness - I shall pass this way but once. Any good thing therefore that I can do or any kindness that I can show to any human being, let me do it now. Let me not defer it or neglect it, I shall not pass along this way again." In lieu of flowers, donations in Eleanor’s memory may be made to the American Cancer Society directly at https://www.cancer.org/ Funeral and burial services for Eleanor will be held privately.

Attleboro &#8211; Eleanor Rose (Fontaine) Kennedy, 92, of Attleboro, passed away peacefully with her daughters by her side on Saturday, April 4, 2020. She was the loving wife of the late Norman Earle Kennedy Sr. Born on December 2, 1927 in... View Obituary & Service Information

The family of Mrs. Eleanor Rose Kennedy created this Life Tributes page to make it easy to share your memories.

Send flowers to the Kennedy family.