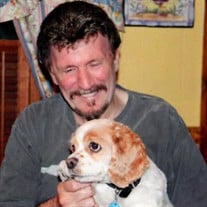 ATTLEBORO- Edward J. “Eddie” Silvia Jr., 77, of Attleboro and formerly of Dighton, passed away peacefully in the early morning hours of Thursday, May 2, 2019, at his home, surrounded by the love, comfort, and care of his wonderful family. He was the beloved husband to Kathleen A. (Wanamaker) Silvia of Attleboro, who he happily married on August 30, 2003. Born on October 23, 1941, in Fall River, he was the dedicated son of the late Edward J. Silvia Sr. and Ora (Frank) Silvia. A brave and patriotic man, Eddie was a proud veteran of the United States Army. He served from 1967 to 1973, and respectfully achieved the rank of SP5. During his time in the service, Eddie spent two years in Germany and he also received the National Defense Service Medal. Following his time in the service, Eddie worked for many years as a truck driver and also an entrepreneur. Having a talent for art and graphic design, Eddie decided to open his own business and enter the market of creating and designing signs. He owned and operated “Kathy’s Signs”, which was located In Taunton. Eddie took great pride in a job well done and he earned quite the reputation as a perfectionist in creating beautifully constructed signs. In his spare time, Eddie liked to practice and improve his skills of art and graphic design. He loved to paint and was often able to turn a blank canvas into something special. He enjoyed going on vacation, with his favorite destination being the Connecticut Lakes in northern New Hampshire. Above all, Eddie enjoyed spending time and making memories with his cherished family. In addition to his wife, Kathy, Eddie is survived by his stepson, Brian Gousie and his fiancé Rochelle Almeida of Rehoboth; his grandchildren, Eric and Alyssa Brault of Attleboro and Zachary and Joshua Gousie of Rehoboth; his sister, Veronica Travis of Norwood; his nieces, Michelle and Sophia Curletti of West Stockbridge, MA; his nephew, Hunter Curlett of West Stockbridge, MA; his beloved dog, Sassy; and many extended family members and friends. In addition to his parents, Eddie is predeceased by his stepdaughter, Dawne Brault. Relatives and friends are invited to attend a graveside service with military honors, on Saturday, May 18, 2019, at 11:00 a.m. at Steven’s Corner Cemetery, Route 118, Rehoboth. In lieu of flowers, donations in Eddie’s memory may be made to the Perkins School for the Blind, 175 North Beacon Street, Watertown, MA 02472 or directly to https://www.perkins.org/get-involved/donate

ATTLEBORO- Edward J. &#8220;Eddie&#8221; Silvia Jr., 77, of Attleboro and formerly of Dighton, passed away peacefully in the early morning hours of Thursday, May 2, 2019, at his home, surrounded by the love, comfort, and care of his wonderful... View Obituary & Service Information

The family of Mr. Edward J. "Eddie" Silvia Jr. created this Life Tributes page to make it easy to share your memories.

Send flowers to the Silvia family.