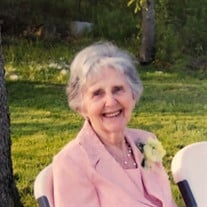 ATTELBORO – Edna B. Hamor, 96, of Attleboro passed away surrounded by her loving family on Sunday, December 8, 2019 at the Life Care Center of Attleboro. She was the wife of the late Herbert Hamor. Born on September 5, 1923 in Dedham, Maine, she was a daughter of the late Ralph and Emma (Pottle) Bennoch. Edna spent most of her adult life residing in Wrentham but has been a resident of Attleboro the past 10 years. She worked at the Delaney School in Wrentham as a cafeteria cook for over 20 years. Edna enjoyed knitting, reading, crossword puzzles, singing and camping. She was an avid walker and treasured her time spent with her loving family. Edna was a communicant of St. Vincent de Paul Parish in Attleboro. The family would like to give a special thanks to the staff at the Life Care Center of Attleboro for the love and care provided to Edna during her stay. She is survived by her children, James Hamor of Attleboro and Sandy Viens and her husband Greg of Attleboro; her grandchildren, Christine Hamor and her husband Jon of Attleboro, Kaleigh Pimble and her husband Ricky of Seekonk and Chelsea Proulx and her husband Tim of Seekonk; her great grandchildren, Jarred Bathen of Attleboro, Katherine, Molly and Anna Pimble all of Seekonk and Mason, Lucas, Riley and Ada Proulx all of Seekonk. She was the mother of the late Donald Hamor, grandmother of the late Jason Hamor, great grandmother of the late Phillip Hamor and sister of the late Ralph, Wesley and Alice Bennoch and Dorothy Woodhams. Relatives and friends are invited to attend a Mass of Christian Burial at 10 a.m. on Thursday, December 12, 2019 in St. Vincent de Paul Parish, 71 Linden Street, Attleboro. Burial in the Massachusetts National Cemetery will be held privately. Visitation has been respectfully omitted. In lieu of flowers, donations in Edna’s name may be made to the Activity Department at Life Care Center of Attleboro, 969 Park Street, Attleboro, MA 02703.

ATTELBORO &#8211; Edna B. Hamor, 96, of Attleboro passed away surrounded by her loving family on Sunday, December 8, 2019 at the Life Care Center of Attleboro. She was the wife of the late Herbert Hamor. Born on September 5, 1923 in Dedham,... View Obituary & Service Information

The family of Mrs. Edna B. Hamor created this Life Tributes page to make it easy to share your memories.

ATTELBORO – Edna B. Hamor, 96, of Attleboro passed away surrounded...

Send flowers to the Hamor family.