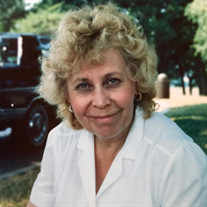 The life of Edith Alice McNary Smith ended peacefully on May 12, 2020. Alice was 88 and had been a resident of Garden Place HealthCare, since 2010. She died from causes related to Alzheimer’s disease. As this is a time of turmoil in our country, Alice’s family has elected to hold her services in the Fall, likely at the end of September so family members can travel to Attleboro and celebrate her life together. Another notice will be made available prior to the Fall service to be held at All Saints Episcopal Church in Attleboro. Alice’s family welcomes the posting of a note or memory on the Duffy-Poule Funeral and Cremation website under obituaries/tribute wall. A lifelong resident of Attleboro, Alice Smith’s life was centered around her family, her love of teaching and dance. She met her future husband, Sheldon Smith, while they were in first grade and married him on Christmas night in 1951. They were a devoted couple for life. She excelled at ballet dancing and became a prima ballerina with the Boston Ballet Company. She graduated from Attleboro High School in 1949. In lieu of college, Alice worked to help support herself and her husband while he pursued his higher education. Alice taught ballet locally prior to opening the Alice McNary Smith School of Dance specializing in ballet and tap dancing. Later she and Sheldon taught ballroom dancing to adults and children at night. Alice’s love for children led her to teach Title One Math for the Attleboro School System until retirement. She enjoyed being a member of the Historical Society of Attleboro. Having been athletic all her life, she continued to swim five days a week at the Attleboro YMCA into her late 70’s. She was a kind and loving woman who succeeded at everything she set out to do. Fortunately, this included loving children and her family with all her heart. Alice is survived by her three children, daughter Shelley Jean MacDonald and her partner Gerald Andre Ross, son Joseph Lyman Smith and spouse Kelly Verdun Smith, and daughter Jennifer Smith Miguel, Esq. and her partner Scott Morawski. Her grandchildren are Jeffrey Peter MacDonald, Thomas Sheldon MacDonald, Lauren Smith Barry, Ethan Christopher Miguel and Jonathan Paul Miguel. She had six great grandchildren. She also leaves behind a younger brother, Richard D. McNary. Preceding her in death was Alice’s husband, Ezra Sheldon Smith, III. He was the love of her life. She was the daughter of Bessie Kerkhoff McNary. Alice’s aunt, Dr. Mary Edith Kerkhoff, M.D. was also a very close relative. Last, but not least, was her older brother, Dr. William Francis McNary Jr., PhD. Special thanks to the staff at Garden Place HealthCare and to Jen, her hospice nurse, for their love and exceptional care. In lieu of flowers, donations in Alice's name may be made to the Attleboro Animal Shelter, P.O. Box 592, Pond Street, Attleboro, MA 02703 or the Attleboro Historical Preservation Society, 28 Sanford St, Attleboro, Massachusetts 02703.

The life of Edith Alice McNary Smith ended peacefully on May 12, 2020. Alice was 88 and had been a resident of Garden Place HealthCare, since 2010. She died from causes related to Alzheimer&#8217;s disease. As this is a time of turmoil... View Obituary & Service Information

The family of Mrs. Edith Alice Smith created this Life Tributes page to make it easy to share your memories.

The life of Edith Alice McNary Smith ended peacefully on May...

Send flowers to the Smith family.