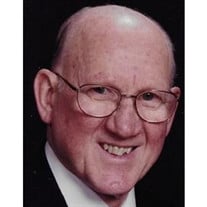 Douglas H. St. Pierre, 91 previously of 805 Park St, Attleboro, MA died at Life Care Center of Attleboro on Holy Thursday, April 9, 2020, 5 weeks before his upcoming 71st wedding anniversary. He was the beloved husband of Lorraine B. (Bussiere) St. Pierre to whom he was married on May 14, 1949. Born in Attleboro, MA on October 8, 1928, he was a son of the late Arthur and Arreatta (Smith) St. Pierre. He was raised and educated in Attleboro, where he was a 1946 graduate of Attleboro High School. Mr. St. Pierre worked at the Public Market, Attleboro from 1942 to 1945. He then worked at Ashley Lumber Millwork from 1945 to 1963. A finished cabinet maker, he opened his own business, St. Pierre’s Cash & Carry Building Materials & Cabinet Shop, Chartley, MA in 1963, retiring in1989. He continued working out of his home until 1991. He went to work at Shaw’s Supermarket, South Attleboro in 1992 until 2009 when Shaw’s closed. He was a charter member of the Attleboro Jewelry City Harmonizers, a chapter of the Society for the Preservation and Entertainment of Barbershop Quartet Singing in America (S.P.E.B.Q.S.A) from 1955 to 1965. The Harmonizers participated in chorus, quartet and octette competitions across the country & in Canada. A strong and dedicated believer in the Catholic faith Mr. St. Pierre was a longtime communicant of St. Joseph’s Roman Catholic Church, Attleboro, until it closed in 2012. He then became a communicant of St. Vincent’s de Paul Catholic Church, Attleboro until November 2016. As a result of a serious auto accident in November 2016, Mr. St. Pierre was unable to return to his church or his home that he had shared with his loving wife for 64 years. He became a resident of Life Care Center of Attleboro, enjoying Sunday Mass every week. He was also a communicant and longtime volunteer of LaSalette Shrine, Attleboro dating back to the early 1960’s until the mid 2000’s. He was a member of the Attleboro Catholic Cursillo Movement in the 1960’s -70’s. Mr. St. Pierre enjoyed tinkering in his workshop and planning and planting his vegetable gardens every year. He became known as “The Vegetable Man” as he shared the overflow not only with his family and neighbors, but also with LaSalette Soup Kitchen, New Hope, Road Back, The Family Resource Center, and Beta Agency. He leaves his family and friends with many beautiful and loving memories which will be cherished always. In addition to his wife, he leaves his three daughters, Linda St. Pierre of Attleboro, Sharon Ponce (Nefta) of Pascoag, RI, Diane Gilberti (Cosmo) of Westford, MA, his two sons, David St. Pierre (Patricia) and Michael St. Pierre (Elizabeth) both of North Attleboro, and his two daughter in laws, Donna St. Pierre and Michelle Peirce, both of Attleboro. He was the father of the late Deacon Lawrence St. Pierre and Steven St. Pierre of Attleboro. He leaves 13 grandchildren, 11 great-children, many nieces and nephews, extended family members, and dear friends. He was the brother of the late Arthur St. Pierre, Roland St. Pierre, Allen St. Pierre, Noel St. Pierre, and Carole St. Pierre, all of Attleboro, and the late Robert St. Pierre of Kennebunk, ME. Due to the current Covid 19 crisis Mr. St. Pierre’s funeral and internment will be private. A Celebration of Life Memorial Mass will be held at a future date. In lieu of flowers please consider a donation in his name to St. Joseph’s Food Cellar, 71 Linden St., Attleboro, MA or Life Care Center of Attleboro, 969 Park St., Attleboro, MA, Attn: Activities Dept

The family of Mr. Douglas H. St. Pierre created this Life Tributes page to make it easy to share your memories.