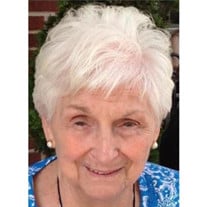 NORTH ATTLEBORO - Dorothy G. (Farrell) McBride, 89, of Madonna Manor, North Attleboro, a loving wife, mother, grandmother and great-grandmother passed Monday April 27, 2020 at Sturdy Memorial Hospital Attleboro, MA due to complications from the Covid 19 virus. She was the beloved wife of the late Edward F. McBride for sixty-three years. Born in Boston on November 15, 1930, Dottie was the daughter of the late Joseph and Alice (Barry) Farrell. Although originally from Dorchester (O.F.D.), Dottie & Ed resided in Centerville, MA for over ten years after retiring. Dottie was employed for many years at Zayre Department Store (then) Ames in managerial positions. Dottie loved her music, all types of travel with family including camping, cruising, Disney World and many other destinations; also knitting or crocheting, cooking and spending time with her beloved family. Dottie is survived by seven loving children: Barbara A. Murphy and her husband Paul of Canton, Donna M. Ellis of Northport, FL, Arlene McCarthy and her husband James of Foxboro, Susan P. Murphy of Bellingham, MA, Deborah McBride of Mattapoisett, MA, Thomas J. McBride and his wife Anne of Attleboro and Alison M. McBride of Attleboro; nineteen grandchildren; sixteen great-grandchildren. Dottie was the beloved sister of the late Barbara Farrell Regan, and the late Geraldine Farrell Hughes. Also survived by several nephews and a niece. Funeral services and burial for Dottie will held privately by her family due to the current COVID crisis. In lieu of flowers, donations in her memory may be made to the Alzheimer's Association directly at alz.org.

The family of Mrs. Dorothy G. McBride created this Life Tributes page to make it easy to share your memories.

Send flowers to the McBride family.