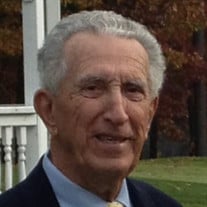 ATTLEBORO - Donald J. Pelletier, a lifelong resident of Attleboro, MA, passed away at the age of 94, on Monday, August 9, 2021, after a brief illness. He was the husband of the late Mary Pelletier. Don was born in Attleboro, MA and was the son of the late Albert and Rose (Poissant) Pelletier. He attended Attleboro High School before leaving early to serve his country in World War II. He served in the United States Navy as a Seamen Second Class, and upon completion of his military service, he graduated from Attleboro High School as a proud member of the class of 1947. Don was an accomplished athlete and while most people know him for his golfing abilities, he was also a talented tennis player. He was the number seven ranked player in New England during the 1950s and was a two-time winner of the Attleboro City Tennis Open in 1956 and 1957 in both singles and doubles. He enjoyed teaching tennis and passing on his knowledge of the game. His golfing accomplishments were equally impressive. He was a founding member of the Attleboro Area Golf Association and in 1991 was elected to the AAGA Hall of Fame. He was a past member of Highland Country Club in Attleboro and for the last 45 years, a member of Wannamoisett Country Club in Rumford, RI. A fierce competitor, he was dubbed “The second-best putter in Rhode Island” by his good friend Brad Faxon. Don spent many years working in the ring and yearbook sales division at the Balfour Company and later worked for and retired from Blue Circle Atlantic Cement as a regional sales rep. He also served on the Board of Directors for the Andrade/Faxon Charities for Children and the CVS Charity Classic. Don also was a volunteer for the Northeast Amateur at Wannamoisett. Don had a wide circle of friends, and nothing gave him more joy than spending time with his pals at Wannamoisett. He is survived by his three children and their spouses; Marc Pelletier and his wife Sharon of North Attleboro, Lisa Murphy and her husband Brian of Holden and Joel Pelletier of Surprise, AZ; his six loving grandchildren whom he adored and by whom he was lovingly known as “Pelly”, Allison Doherty of Holden, Erin Fort of Seekonk, Nicholas Murphy of Malden, Kristin Masciana of Mansfield, Harrison Murphy of Salem and Kevin Murphy of Washington DC; six great-grandchildren, Brín and Pearse Doherty, Lucy Fort, Molly and Nora Masciana and Grant Murphy; he is also survived by his sister, Lorraine Lacour of Las Vegas, NV. Don’s family would like to thank the Community VNA, especially Gail Robey R.N. and Nila and “The Girls” who showed him so much love and care during his final weeks. They would also like to thank Dr. Steven Bensson and his staff for their care and guidance. Visitation is respectfully omitted. Relatives and friends are invited to attend a Mass of Christian Burial at 10 a.m. on Saturday, August 14th at St. John the Evangelist Church, 133 N. Main Street, Attleboro. Burial will take place privately. In lieu of flowers, donations in Don’s memory may be made to the CVNA Hospice of Attleboro (www.communityvna.com) 10 Emory Street, Attleboro, MA 02703.

ATTLEBORO - Donald J. Pelletier, a lifelong resident of Attleboro, MA, passed away at the age of 94, on Monday, August 9, 2021, after a brief illness. He was the husband of the late Mary Pelletier. Don was born in Attleboro, MA and was the... View Obituary & Service Information

The family of Donald Pelletier created this Life Tributes page to make it easy to share your memories.

Send flowers to the Pelletier family.